Days of Our Lives Spoilers: Monday, September 2 – Stefan Gets Stunning Call from Vivian – Jack and Jennifer’s Pitch to Dr. Rolf 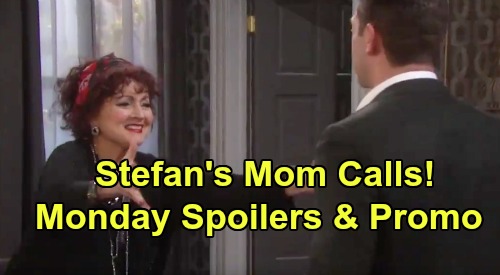 Days of Our Lives (DOOL) spoilers for Monday, September 2, tease that Jennifer Horton (Melissa Reeves), Jack Deveraux (Matthew Ashford) and Eric Brady (Greg Vaughan) will seek answers. They just arrived at the address Kristen DiMera (Stacy Haiduk) provided and were shocked by the person on the other side of the door. It turns out it’s Dr. Wilhelm Rolf (William Utay), but he won’t be eager to give up info.

DOOL fans can expect Eric to take the lead on grilling the doc. Days of Our Lives spoilers say Dr. Rolf will downplay his connection to Kristen, but Eric will keep at it. He’ll vow to search every inch of the townhouse, so Dr. Rolf will finally tell someone to come out. Jack, Jennifer and Eric will all hope to see Nicole Walker (Arianne Zucker) coming around the corner, but another face from the past will appear instead.

Days of Our Lives spoilers state that Robin Strasser will make her debut as a Vivian Alamain on Monday. She’ll shock Eric and the others, but they’ll mainly be focused on finding Nicole and Holly Jonas (Harlow and Scarlett Mallory). Like Dr. Rolf, Vivian won’t be quick to divulge much of anything. They’ll probably fear Kristen’s wrath despite the deal she made, so Eric will take matters into his own hands.

After Eric looks around, he’ll find Holly’s blanket and immediately be filled with hope. Days spoilers say this will be some good motivation for Eric to keep fighting for love! As for Dr. Rolf, Jennifer and Eric will convince him to come back to Salem with them. They’ll plan to set Dr. Rolf up with a new lab and let him work his memory magic.

Meanwhile, Vivian will give Stefan DiMera (Brandon Barash) a call to reveal she’s alive. The timing is interesting since Stefan just pulled a gun on Kate Roberts (Lauren Koslow) and plans to shoot her for killing his mother. It sounds like that call from Mommy dearest herself will change Stefan’s mind! He’ll be floored when he realizes Vivian survived thanks to Dr. Rolf.

In the park, Gabi DiMera (Camila Banus) will walk away from Julie Williams (Susan Seaforth Hayes), who’s having a heart attack. Gabi thinks Julie’s just being dramatic at the moment, so she may stomp off before she figures out this is real. Then again, Gabi does hate Julie with a passion. It’s possible Gabi will indeed realize Julie’s in distress and just decide she doesn’t care. You never know with Gabs!

Regardless, Ben Weston (Robert Scott Wilson) and Ciara Brady (Victoria Konefal) will save the day. It’ll mostly be Ben who steps up since Ciara will be such a mess over poor Julie’s condition. Ben will do CPR and keep Julie alive until paramedics come on the scene, so he’ll be a hero once again.

It looks like a gripping episode’s coming up. We’ll give you updates as other Days news emerges. Stay tuned to DOOL and don’t forget to check CDL often for the latest Days of Our Lives spoilers, updates and news.