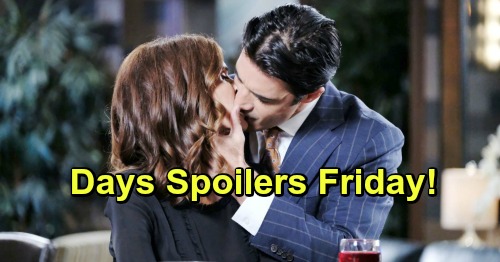 Days of Our Lives (DOOL) spoilers for Friday, April 5, tease that Jack Deveraux’s (Matthew Ashford) mayoral rally will get underway. Naturally, he’ll have his sneaky campaign manager right by his side. Eve Donovan (Kassie DePaiva) has been running this show from day one, so she’ll enjoy their moment in the spotlight.

In fact, Eve will choose to milk it for all it’s worth. Much to Claire Brady’s (Olivia Rose Keegan) dismay, Eve will make this event about her relationship with Jack instead of blowing up Haley Chen’s (Thia Megia) sham marriage. We know that Haley and Tripp Dalton’s (Lucas Adams) wedding will move forward, so it seems Eve won’t divulge the proof against them.

Instead, Eve will announce one more wedding. She’ll tell the rally-goers that she intends to marry Jack and begin a new chapter with him. Days of Our Lives spoilers say the upcoming nuptials will come with some snags, so DOOL fans can expect major drama next week.

In the meantime, Abe Carver (James Reynolds) will strengthen his bond with Sheila Watkins (Tionne “T-Boz” Watkins). He used to loathe Sheila, but he eventually settled into the realm of toleration. Now Abe is really warming up to Sheila and their newfound connection. After Friday’s warm chat, Days spoilers hint that Abe and Sheila will take another step toward love.

Over with Lani Price (Sal Stowers), she’ll meet Jordan Ridgeway’s (Chrishell Hartley) baby boy. Lani will grow attached to him right away, especially when she learns his name is David. DOOL viewers will recall that Lani and Eli Grant’s (Lamon Archey) deceased son shared the same name. It’ll make Lani feel even more drawn to the kid, so Eli will definitely battle concerns about her instant obsession.

Other Days of Our Lives spoilers say Ted Laurent (Gilles Marini) will make a bold move. He’ll exploit the conflict between Hope Hernandez (Kristian Alfonso) and Rafe Hernandez (Galen Gering) by going in for a steamy lip lock. Ted will confess that he’s crazy in love with Hope and plant a kiss like only a romantic Frenchman can.

You can bet Ted will give Hope something to think about! We’ll give you updates as other Days news comes in. Stay tuned to the NBC soap and don’t forget to check CDL often for the latest Days of Our Lives spoilers, updates and news.