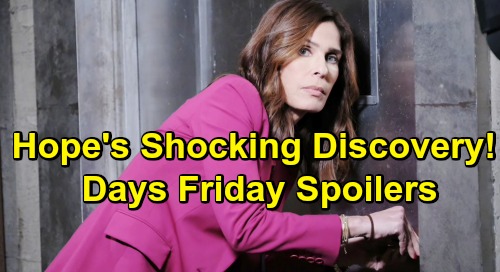 Days of Our Lives (DOOL) spoilers for Friday, July 12, tease that Kate Roberts (Lauren Koslow) and Ted Laurent (Gilles Marini) will be in a tight spot. Kristen DiMera (Stacy Haiduk) just showed up and pointed a gun at them, so she’s obviously got deadly plans. However, Ted and Kate won’t go down without a fight. They’ll do everything they can to change Kristen’s mind and prevent a bloody mess.

Kristen will wonder why she should leave them alive, so Ted and Kate will make their pitch. Days spoilers say they’ll assure Kristen that they can be of use to her. Kate and Ted will promise to do whatever Kristen wants as long as she lets them live. Kristen will ultimately see the benefits of having them on their side, so she’ll opt to lower her weapon.

Days of Our Lives spoilers say Ted and Kate will learn what’s expected of them. They’ll be instructed to pin the kidnapping on Stefan DiMera (Brandon Barash), but it looks like Kristen will have a thing or two to take care of before they go free. She’ll want to make sure she’s got all her bases covered here.

Meanwhile, Hope Brady (Kristian Alfonso) will be hot on Xander Cook’s (Paul Telfer) trail. She’ll follow him as he makes his way to DiMera tunnels, but she’ll lose sight of him at some point. Xander will likely realize Hope’s closing in and take an alternate route instead. Days of Our Lives spoilers say Xander will bump into Kristen, and they’ll get the heck out of there before Hope catches them lurking.

Hope will manage to open the secret room’s door, which will bring quite a surprise. Ted and Kate will be in a rather compromising position – most likely due to the relief of avoiding Kristen’s deadly wrath. Hope may find them in a warm embrace and wonder just how close these two have gotten in captivity.

Naturally, Kate and Ted will downplay the display. They’ll have a shocking tale to tell, but DOOL fans know it’ll be a bogus one! Ted and Kate will have to keep their promise to Kristen unless they want retaliation. Across town, JJ Deveraux (Casey Moss) will be in a bind after being evicted from his apartment. That’ll leave JJ and Haley Chen (Thia Megia) out of a place to live.

Fortunately, Tripp Dalton (Lucas Adams) has more than enough room at the loft. He’ll gain two new roomies and welcome them home in Friday’s episode. Finally, Julie Williams (Susan Seaforth-Hayes) will cool off a pair of hot lovers. She’ll toss water on Stefan and Gabi Hernandez (Camila Banus), who’ll be trying to have a steamy hookup in Julie’s office!

It sounds like some exciting scenes will wrap up this week. We’ll give you updates as other Days news comes in. Stay tuned to DOOL and don’t forget to check CDL often for the latest Days of Our Lives spoilers, updates and news.