Days of Our Lives Spoilers: Crazy Susan Shocks Will and Sonny – Kristen Blows Her Own Cover?

BY hellodrdavis on July 11, 2019 | Comments: one comment
Related : Days of Our Lives, Soap Opera, Spoiler, Television 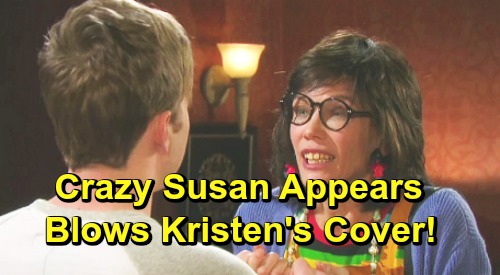 Days of Our Lives (DOOL) spoilers tease that Susan Banks (Stacy Haiduk) will be back in action. It’s been a while since we’ve seen Susan in Salem. Last time around, Susan crashed the Kiriakis mansion and made Victor Kiriakis’ (John Aniston) life a living hell as she paraded around the mansion in her weird way.

Well, this time around, Susan’s appearance will likely make someone else’s life hell, and that’s Kristen DiMera (Stacy Haiduk). As it so happens, Kristen will decide to impersonate Susan once again after Xander Cook (Paul Telfer) steals her Nicole mask. Naturally, crazy Kristen will attempt to use the opportunity to get close to Brady Black (Eric Martsolf).

As DOOL viewers know, Kristen has been trying to seduce Brady as she’s been impersonating Nicole Walker (Arianne Zucker), but that hasn’t worked out the way that Kristen had hoped. Brady has consistently turned down “Nicole’s” advances, but that won’t stop Kristen from trying again.

According to DOOL spoilers, “Nicole” will come on to Brady once again, and again Brady will turn her down flat. Of course, this will infuriate Kristen, who just wants to get her paws on Brady any way that she can, even if she has to do so being someone else.

Well, it looks like Kristen will then try her luck at seducing Brady as she impersonates Susan. She’ll don her fake teeth and Susan-style clothing and give Brady her best shot. Of course, Brady will be horrified by the turn of events, and he’ll do his best to fend off “Susan’s” advances.

But it won’t be long before the real Susan turns up in Salem. According to Days of Our Lives spoilers, Will Horton (Chandler Massey) and Sonny Kiriakis (Freddie Smith) will have a run-in with the fake Susan, only to then run into the real Susan shortly thereafter! They’ll be shocked and confused about what’s going on.

Will This Be The Beginning Of The End For Kristen DiMera?

And given that Will and Sonny will suspect that something weird is going on, we can’t help but wonder whether this could be the beginning of the end for Kristen. She’s been successfully hiding in plain sight behind her Nicole mask, and now she’ll be hiding as “Susan,” but given that the real Susan will appear on the scene, will Kristen be caught?

The real Susan could indeed blow Kristen’s cover if Kristen’s not careful. But knowing Kristen, she’ll probably figure out pretty quickly that Susan’s back. Will she once again strong-arm Susan into submission and get her to go along with her plan? DOOL viewers will have to wait to see!

Do you think that Susan’s reappearance will lead to Kristen’s big reveal? Stay tuned to DOOL and don’t forget to check CDL often for the latest Days of Our Lives spoilers, updates, and news.