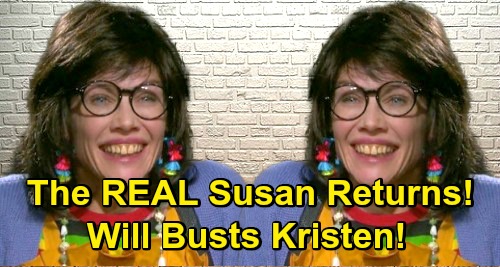 Days of Our Lives (DOOL) spoilers tease that Kristen DiMera’s (Stacy Haiduk) plan will take a wrong turn. DOOL fans know Kristen has a couple of plots in motion. She’d like to take over DiMera Enterprises, but that’s nowhere near as important as winning Brady Black (Eric Martsolf) back. Having Brady in her life again is Kristen’s priority.

As a result, Kristen’s schemes will get more desperate and her moves will get dirtier. She’s not a patient woman, so Days viewers can expect the action to heat up. Since Kristen hasn’t gotten very far by posing as Nicole Walker (Arianne Zucker), she’ll try her luck posing as Susan Banks (Stacy Haiduk) next.

During the week of July 15-19, Days of Our Lives spoilers say Brady will be perplexed by “Susan’s” surprise visit and flirtatious behavior. It’s weird for Kristen to take this route since unlike Nicole, Brady isn’t attracted to Susan. He may only become suspicious, particularly after the real Susan shows up in Salem! That’ll definitely be a curveball for Kristen as she tries to keep her plan intact.

However, Brady won’t be the only threat here. Days of Our Lives spoilers say Will Horton (Chandler Massey) will make a disturbing discovery. He’ll be unsettled when the real Susan arrives after he’s interacted with Kristen’s version. When Susan has no idea what Will’s talking about, it should lead to questions. Sonny Kiriakis (Freddie Smith) will also get in on this, so he’ll have concerns just like Will.

Of course, Susan spent time in a mental institution. Before that, she pretended amnesiac Will was EJ DiMera (last played by James Scott) and lived a secret life with him in Memphis. In other words, Susan hasn’t exactly been operating with a full deck. It could be easy for Will and Sonny to brush this off as another mental break or at least lingering problems.

Even so, doubts could nag at them – especially Will. He knows the real Susan quite well, so he may start to put some clues together and suspect Kristen’s involvement. Will and Sonny need a new story now that the tumor drama’s over, so it’d a good idea to pull them into the Kristen chaos.

It sounds like Kristen’s decision to pose as Susan could backfire big time! Will this put Will, Sonny and other Salemites on the right track? We’ll give you updates as other Days news comes in. Stay tuned to DOOL and don’t forget to check CDL often for the latest Days of Our Lives spoilers, updates and news.