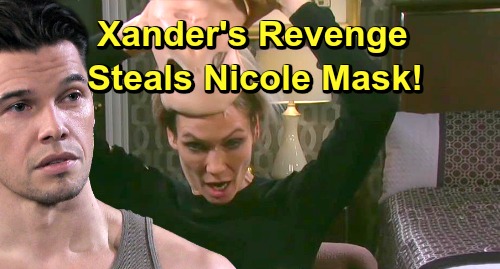 Days of Our Lives (DOOL) spoilers tease that Kristen DiMera (Stacy Haiduk) will betray her ally. Of course, she’ll think it’s fair since Xander Cook (Paul Telfer) betrayed her first! Kristen ordered Xander to kill Ted Laurent (Gilles Marini) and Kate Roberts (Lauren Koslow), but Xander couldn’t go through with it. He lied to Kristen, so she’ll clean up the mess by forcing the hostages to do her bidding.

Kate and Ted will agree to pin the kidnapping on Stefan DiMera (Brandon Barash), so Kristen will be in the clear. However, Kristen won’t protect her partner in crime. She’ll tell Ted and Kate they’re more than welcome to sell Xander out – she may even require it! Days of Our Lives spoilers say Xander will find himself in handcuffs thanks to Kristen’s betrayal, so he’ll vow to retaliate.

Despite Xander’s arrest on July 15, he’ll be a free man the next day. It seems Xander will get out on bail and immediately head back to Kristen’s hotel room. DOOL fans know the Salem Inn is Kristen’s place of refuge. It’s the only spot where she can safely take off her disguise and be her true self. Kristen is forced to be “Nicole Walker” (Arianne Zucker) everywhere else in town.

Xander will decide to use Kristen’s dilemma to his advantage by stealing her Nicole mask. He’ll trap an enraged Kristen in her room and leave her wondering what to do next. Days spoilers say Xander will even taunt Kristen by sending her a Mexican wrestling mask instead. He’ll definitely have a blast as Kristen suffers, but she’ll prove to be a resourceful gal.

Days of Our Lives spoilers state that Kristen will come up with a plan, which will require an alternate disguise. Luckily, Kristen brought some other options along in her luggage. She just so happens to have the wig, teeth, glasses, and crazy clothing she needs to pose as Susan Banks (Stacy Haiduk).

After Kristen dons her Susan garb, she’ll head over to the Kiriakis mansion in hopes of retrieving what was stolen. The “Nicole” mask hunt will bring some surprises and hilarious moments, so don’t miss all the action. We’ll give you updates as other Days news comes in. Stay tuned to DOOL and don’t forget to check CDL often for the latest Days of Our Lives spoilers, updates and news.