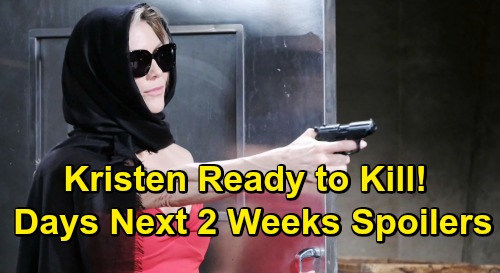 Days of Our Lives (DOOL) spoilers for the next two weeks tease we’ll see some tender moments as well as some explosive ones. During the week of July 8-12, Claire Brady (Olivia Rose Keegan) will get a visit from Eve Deveraux (Kassie DePaiva). DOOL fans can expect Eve to pour her heart out and apologize for not getting Claire the help she needed.

Claire won’t hold Eve’s actions against her, but Ciara Brady (Victoria Konefal) and Marlena Evans (Deidre Hall) certainly will! Days of Our Lives spoilers say they’ll interrupt Eve and Claire’s emotional conversation. Marlena and Ciara will chew Eve out, but Claire will defend Eve as best as she can. She’ll fib that Eve didn’t really know how bad things were, so that’ll curb their anger a bit.

However, Eli Grant (Lamon Archey) will insist Eve knew exactly what was going on, and the messages on Claire’s phone prove it. After the phone vanishes, Eli will know exactly who to confront. He’ll insist Eve must be to blame.

Eve will indeed be behind the phone’s disappearance, so she’ll come clean to Jack Deveraux (Matthew Ashford) later and make a public statement. Despite her vicious vendetta, Eve will be forced to drop the charges against Ben Weston (Robert Scott Wilson). Nevertheless, Days of Our Lives spoilers say Eve will remain determined to take Ben down one way or another.

Over with Kristen DiMera (Stacy Haiduk), she’ll reveal to Ted Laurent (Gilles Marini) and Kate Roberts (Lauren Koslow) that she’s alive. Kristen will pull out a gun to shoot and kill the hostages, but they’ll deliver desperate pleas. Kate will argue that they can help her, so Kristen will count on that promise after all this blows up.

After Kristen gets away with Xander Cook (Paul Telfer), Hope will break the door down. She’ll find Ted in a compromising position with Kate, so that’ll throw her for a loop. During the week of July 15-19, Xander will face a shocking arrest. That’ll be thanks to Kristen, who’ll repay his betrayal with her own!

Of course, revenge tends to be an endless cycle among Days villains. Xander will seek vengeance soon after his arrest, so Kristen had better watch out. Back with Ted and Kate, they’ll keep Kristen’s secret as they live in fear. Kristen will keep posing as “Nicole Walker” (Arianne Zucker), but she’ll add “Susan Banks” (Stacy Haiduk) to the mix eventually.

Days spoilers say Brady will be baffled when Susan corners him to flirt. Afterward, Will Horton (Chandler Massey) and Sonny Kiriakis (Freddie Smith) will be floored when the real Susan shows up. As for Xander, he’ll apparently get out on bail or be cleared without sufficient evidence. Either way, Gabi will rip into Xander and spark a fierce faceoff.

Finally, Jennifer Horton (Melissa Reeves) will push Jack to recapture the man he used to be. After Jack puts up a fight, Jenn will feel dejected. She’ll give up on having a shot at a real reunion with Jack, but a lucky break is headed Jennifer’s way before long.

It sounds like the next two weeks will bring major drama. We’ll give you updates as other Days news comes in. Stay tuned to DOOL and don’t forget to check CDL often for the latest Days of Our Lives spoilers, updates and news.