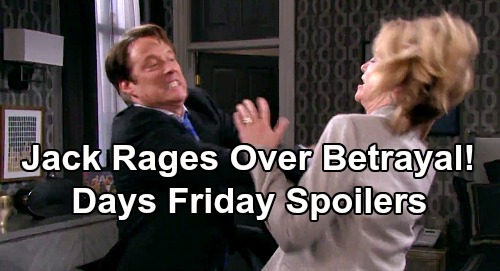 Days of Our Lives (DOOL) spoilers for Friday, July 26, tease that Tripp Dalton (Lucas Adams) will do his best to comfort Haley Chen (Thia Megia). He’ll give her one of the tranquilizers he got from Dr. Henry Shah (Andre Khabbazi) and urge her to just try to relax. Haley can’t sleep thanks to horrifying visions of Claire Brady (Olivia Rose Keegan), but Tripp will assure Haley that he’s there and will watch out for her.

Haley will end up falling asleep in Tripp’s arms, so they’re moving into dangerous territory here. Tripp doesn’t think he has feelings for Haley, but Days spoilers say he feels more for her than he realizes. It won’t be long until Tripp starts to accept that he indeed views Haley as something besides a friend.

Tripp will fight how he feels for the sake of Haley and JJ Deveraux’s (Casey Moss) relationship, but that’s sure to be tricky now that they’re all living at the loft. Days of Our Lives spoilers state that Haley will keep leaning on Tripp while JJ remains in the dark on her hallucinations. That should make Tripp feel even closer to her, so big drama’s brewing.

Over with Jack Deveraux (Matthew Ashford), he’ll reel over the discovery he just made. Jack caught Eve Deveraux (Kassie DePaiva) burning Dr. Wilhelm Rolf’s (William Utay) diary, so he’ll confront his wife about this act of betrayal. Of course, Jack doesn’t realize there’s been a far worse betrayal. He was given a dose of plain sugar water instead of the actual serum.

It looks like that shocker may come out in this confrontation. Now that Jack knows Eve isn’t on his side at all, he may demand answers about the serum dose she administered. Eve could easily blurt out that the serum was indeed phony and scramble to explain. By the time Monday rolls around, Days of Our Lives spoilers say Jack will bark that he wants a divorce!

Until then, DOOL fans can expect “Nicole Walker” (Arianne Zucker) aka Kristen DiMera (Stacy Haiduk) to seek some help. She’ll reach out to Tony DiMera (Thaao Penghlis) with a marriage proposal in mind. Kristen will have big plans for a rushed wedding and a quick rise to the CEO spot, so we’ll see how her plot works out for her.

Gabi Hernandez (Camila Banus) will have the same idea, so Stefan DiMera (Brandon Barash) will hear her grand scheme and decide he’s all in on their nuptials. It sounds like some great scenes are on the way. We’ll give you updates as other Days news comes in. Stay tuned to DOOL and don’t forget to check CDL often for the latest Days of Our Lives spoilers, updates and news.