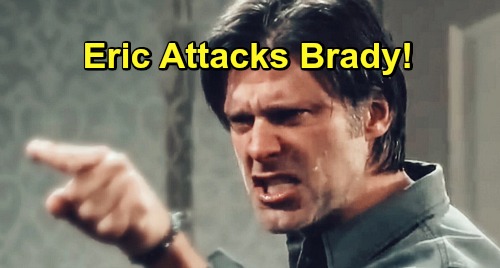 Days of Our Lives (DOOL) spoilers tease that Brady Black’s (Eric Martsolf) fear will become a reality. He’s been worried about reigniting his brother battle with Eric Brady (Greg Vaughan), but he’ll fail to prevent what he’s afraid of. DOOL fans can expect Eric to unleash his wrath on Brady in a big way.

There’s no word yet on why Eric will fly off the handle, but there are a couple of good options to consider. For starters, we should consider the obvious source of conflict: “Nicole Walker” (Arianne Zucker). She’s been making plenty of moves on Brady, but he’s shut her down every time. Brady doesn’t want to start a war with Eric again, but he may do that anyway by defending her new marriage.

During the week of July 29-August 2, Days of Our Lives spoilers say “Nicole” will marry Tony DiMera (Thaao Penghlis). This news will leave Eric floored – and perhaps furious when he finds out Brady knew and did nothing to stop it. Eric may rage about Brady letting “Nicole” make a grief-driven decision. He may not like that “Nicole’s” sinking deeper and deeper in DiMera drama either.

Of course, Brady will realize this is a business ploy and nothing more. He may explain that to Eric and contend that “Nicole” has a right to do what she wants. Brady may even feel like this is s useful distraction as “Nicole” continues to struggle with grief. He might argue that “Nicole” can get an annulment or divorce eventually.

Then again, this Days conflict could stem up Sarah Brady’s (Linsey Godfrey) terrible mistake. She’ll slip up and tip Rex Brady (Kyle Lowder) off to her feelings for Eric next week. Once Sarah confesses all, Rex may blame Eric for stealing Sarah’s heart. He might go trash-talking to Brady and stir the pot between them. Love interest theft is a sore spot for Brady, and he’s taken jabs at Eric for it in the past.

Whatever the case, Days of Our Lives spoilers say Eric will blast Brady and launch a vicious attack. He’ll lunge at his brother, grab his shirt and pin him against the wall, so these scenes are sure to be intense! We’ll give you updates as other Days details emerge. Stay tuned to DOOL and don’t forget to check CDL often for the latest Days of Our Lives spoilers, updates and news.