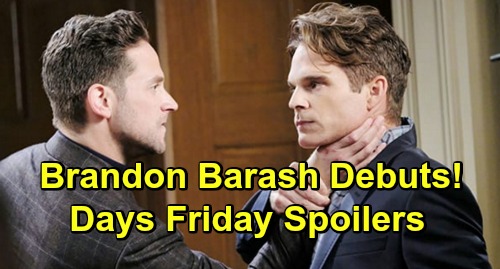 Days of Our Lives (DOOL) spoilers for Friday, March 22, tease that John Black (Drake Hogestyn) will have some questions for Diana Cooper (Judith Chapman). He’ll think they should talk about the attempts on Dr. Marlena Evans’ (Deidre Hall) life, so Diana will start to panic. She’ll worry that the jig is up, and that would obviously derail all her plans.

Diana was hoping to get Marlena out of the picture and score John for herself. Now she’ll fear that she could lose John forever and head to prison for the rest of her life. Days of Our Lives spoilers say John may be setting a little trap here. He’ll pull a “gotcha” once Monday’s new episode. March 25, rolls around, so this is his chance to lay the groundwork.

Over with Leo Starke (Greg Rikaart), he’ll get some infuriating news. DOOL fans can expect Brady Black (Eric Martsolf) to pull Leo into his setup, so he’ll be pretty pleased with himself. Leo will realize what Brady’s done when Stefan DiMera (Brandon Barash) blasts him over a botched DiMera deal. It sounds like Barash’s first airdate will bring some explosive moments!

In the meantime, JJ Deveraux (Casey Moss) will react to Haley Chen’s (Thia Megia) bombshell. She just admitted she’s going to marry Tripp Dalton (Lucas Adams), so JJ will be hurt. He understands that he betrayed Haley and caused total chaos, but Tripp? JJ won’t see why Haley would choose to marry Claire Brady’s (Olivia Rose Keegan) boyfriend, but she’ll spell out her reasons and push him to accept it.

Of course, Claire reaction is the one Days viewers really want to see! Tripp just confessed that he’s got something to tell her. He suggested Claire’s not going to like it, but that’s the understatement of the year. Once Tripp delivers the marriage shocker, Claire will hit the roof. She’ll explode at Tripp and wonder how he could even consider doing something like this.

No matter how hard Tripp tries to explain, Claire just won’t be on board. She also won’t be able to change Tripp’s mind, but there’s no way she’s giving up. Days of Our Lives spoilers say Claire will plot wedding sabotage next week.

It looks like some exciting scenes are brewing. We’ll give you updates as other Days details emerge. Stay tuned to DOOL and don’t forget to check CDL often for the latest Days of Our Lives spoilers, updates and news.