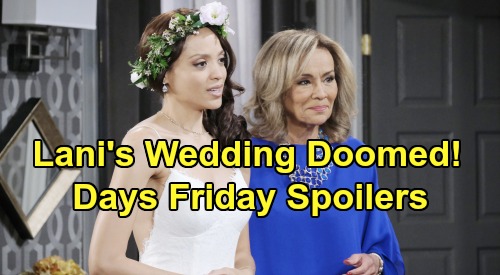 Days of Our Lives (DOOL) spoilers for Friday, November 1, tease that Lani Price (Sal Stowers) and Eli Grant (Lamon Archey) will get ready for their nuptials. Their wedding day will finally arrive, but Lani will have more than just pre-wedding jitters. She’ll be a nervous wreck over what Gabi DiMera (Camila Banus) could do if she doesn’t play by her rules.

Days spoilers say Lani will get all dolled up for the ceremony, but she’ll struggle with an overwhelming sense of dread. She’ll try to reach a last-minute compromise, but Gabi won’t want to hear it. Lani will start to accept that this is really happening. She’ll have to dump Eli at the altar or Julie’s a goner.

Before the ceremony begins, Lani’s mom will return to town. Days of Our Lives spoilers say Marilyn McCoo will reprise her role as Tamara Price. It’s a big deal since Tamara hasn’t been seen on DOOL since 1987! Tamara will embrace Lani and let her know she’s thrilled to be there for her big day. It looks like Tamara will even sing a song for her daughter, so that should be bittersweet.

Lani will hate the thought of breaking Eli’s heart, especially fun of so many people she cares about. Tamara will bring along a plus one played by McCoo’s real-life husband, Billy Davis Jr. Abe Carver (James Reynolds) will also share a private moment with Lani before the nuptials. He’ll have some words of wisdom for Lani, which should make her feel even worse about what she’s about to do.

Other Days of Our Lives spoilers say Jack Deveraux (Matthew Ashford) will visit the courthouse. He’ll pick up a marriage license and prepare for his own wedding next week. Unfortunately, disaster’s set to strike shortly after Jack’s marriage to Jennifer Horton (Melissa Reeves).

In the meantime, Xander Cook (Paul Telfer) and Maggie Kiriakis (Suzanne Rogers) will try to change Sarah Horton’s (Linsey Godfrey) mind. They’ll do their best to convince Sarah that Salem is where she belongs. Of course, Sarah’s been eager to leave town due to her pregnancy. She may stick to her plan for now, but some curveballs will throw off her plans in the coming episodes.

It sounds like some fantastic scenes are on the way. We’ll give you updates as other Days news emerges. Stay tuned to DOOL and don’t forget to check CDL often for the latest Days of Our Lives spoilers, updates and news.