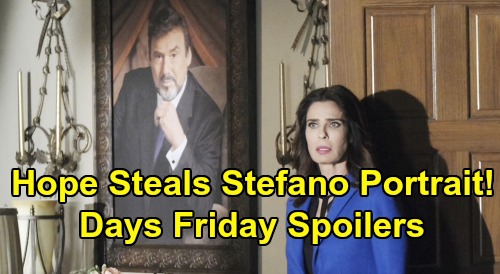 Days of Our Lives (DOOL) spoilers for Friday, October 18, tease that Nicole Walker (Arianne Zucker) will consider coming clean to Eric Brady (Greg Vaughan). DOOL fans know Nicole found out about Sarah Horton’s (Linsey Godfrey) pregnancy thanks to Dr. Wilhelm Rolf (William Utay). The contents of that envelope have left her in a tight spot, which was made even tighter by Xander Cook’s (Paul Telfer) pressure.

Nicole nearly told Eric the truth after he returned home, but she ultimately suggested what she had to tell him would keep. However, Eric could easily remain curious. He might bring up Nicole’s news again and wonder what she was going to tell him. Then again, Nicole’s guilt could be the real problem. She’ll be tempted to reveal that Eric’s going to be a father, but she’ll ultimately stay tight-lipped.

In the meantime, Days spoilers say Ben Weston (Robert Scott Wilson) will offer Jordan Ridgeway (Chrishell Hartley) an apology. He was wrong about Jordan’s responsibility in Ciara Brady’s (Victoria Konefal) almost hit-and-run, so he’ll let her know he’s sorry. Ben is still wary of Jordan, but things will thaw just a bit. Jordan will even invite Ben and Ciara to David Ridgeway’s birthday party next week, but don’t be surprised when this turns out to be a trap.

At the hospital, Days of Our Lives spoilers say Julie Williams’ (Susan Seaforth Hayes) family will battle more worries. Kayla Johnson (Mary Beth Evans) will explain that Julie has bradycardia, so that’ll definitely be a concern as they monitor her recovery. This condition will put Julie’s new heart at risk, but her loved ones will try to stay strong and give her the support she needs.

Despite the troubling updates, Julie may insist on seeing Gabi DiMera (Camila Banus). She’ll want to thank Gabi for Stefan DiMera’s (Brandon Barash) heart sooner or later, so Days of Our Lives viewers will await those emotional scenes. Over with Maggie Kiriakis (Suzanne Rogers), she’ll tackle a challenge. Maggie won’t be pleased about Sarah’s decision to leave town, so she’ll work hard to change her mind.

At the DiMera mansion, a confused Hope Brady (Kristian Alfonso) will show up without understanding her motives. She’ll end up stealing Stefano DiMera’s (Joseph Mascolo) portrait at some point, so Dr. Rolf has really done a number on her! Hope will fully become Dr. Rolf’s preferred form in the week ahead. He wants Hope to behave completely as Princess Gina would, so stay tuned for the total transformation.

It sounds like some exciting scenes are on the way. We’ll keep you posted as other Days details emerge. Stick with DOOL and don’t forget to check CDL often for the latest Days of Our Lives spoilers, updates and news.