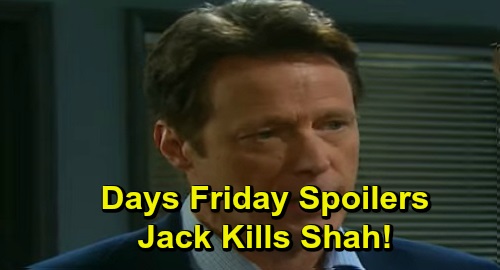 Days of Our Lives (DOOL) spoilers for Friday, September 27, tease that Kristen DiMera (Stacy Haiduk) will be ecstatic over her lucky break. She lashed out at Dr. Wilhelm Rolf (William Utay) when he revealed he couldn’t perform the embryo transfer, but the reason why settled her down. Kristen is already pregnant, so she’ll be absolutely over the moon in Friday’s episode.

DOOL fans know Kristen thought she couldn’t have children of her own, so this news will seem like a sign. She’ll be even more convinced Brady Black (Eric Martsolf) is her destiny. Meanwhile, Jack Deveraux (Matthew Ashford) and Jennifer Reeves (Melissa Reeves) will enjoy some special moments. Since Jack just remembered his past with Jennifer, this will feel like a dream come true for both of them.

Unfortunately, Jack and Jenn’s bliss will be derailed by Dr. Henry Shah (Piter Marek). The deranged doc will awaken after that blow to the head and go after them once again. Days of Our Lives spoilers say Jack will struggle with Dr. Shah over the knife, but this won’t end well for Henry. That knife will plunge straight into Dr. Shah and leave a bloody, dead mess on the floor.

Over with Gabi DiMera (Camila Banus), she’ll overhear something that leaves her infuriated. Vivian Alamain (Robin Strasser) isn’t shy about speaking her mind, so she’ll tell Stefan DiMera (Brandon Barash) exactly what she thinks of Friday. Days spoilers say Vivian will trash Gabi and praise Eve Deveraux (Kassie DePaiva) instead. She’ll argue that Stefan would be much better off with Eve, so Gabi won’t appreciate her mother-in-law’s perspective.

While Gabi unleashes her fury, Sarah Horton (Linsey Godfrey) will focus on a new path. Days of Our Lives spoilers say Sarah will decide she wants to have this baby after all. Since Kristen no longer needs an embryo, that’ll clear the way for Sarah’s pregnancy to move forward. Of course, something tells us Sarah will still face some baby drama down the road!

Finally, Will Horton (Chandler Massey) will make a fierce demand. He’ll order Rafe Hernandez (Galen Gering) to arrest Vivian for Kate Roberts’ (Lauren Koslow) shooting, so the excitement’s revving up in Salem. We’ll give you updates as other Days details emerge. Stay tuned to DOOL and don’t forget to check CDL often for the latest Days of Our Lives spoilers, updates and news.