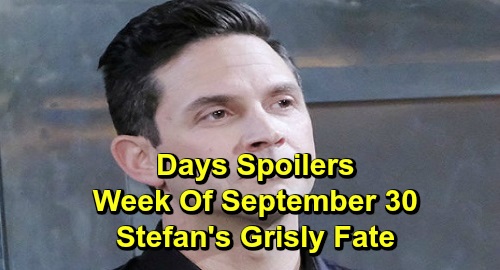 Days of Our Lives (DOOL) spoilers for the week of September 30-October 4 tease that the drama’s about to heat up in Salem. First, Julie Williams (Susan Seaforth Hayes) will face a terrible blow. Doug Williams (Bill Hayes) and Hope Brady (Kristian Alfonso) will have to deliver devastating updates, so that’ll probably about the heart transplant falling through.

Kate Roberts (Lauren Koslow) will survive with Dr. Wilhelm Rolf’s (William Utay) help, so she obviously won’t be giving her heart to Julie. That’ll leave Julie to accept her fate and make a dying wish. She’ll push Doug to fulfill a special request, so he’ll make it happen if he can. Later, Julie will reflect on fond memories with Doug before she passes out. The end will be near, but a new heart’s headed her way soon enough.

Elsewhere, the walls will close in on Vivian Alamain (Robin Strasser). She’ll be on the run as Lani Price (Sal Stowers) searches out in the dark. Lani will pull a gun on Vivian at one point, but Stefan DiMera’s (Brandon Barash) the one in real danger here. It looks like some confusion will lead to Stefan’s fatal gunshot wound and Gabi DiMera’s (Camila Banus) crushing decision to pull the plug.

The good news is Julie will pull through thanks to her new heart, which Gabi should grant her through Stefan. The bad news is Gabi will have to press on without her love. As for Lani, she’ll be a mess over this whole situation. Days spoilers say Lani will battle guilt as this turns into her worst nightmare.

Over with Nicole Walker (Arianne Zucker), she’ll suspect that Sarah Horton’s (Linsey Godfrey) pregnant. Nicole will decide to confront Sarah about the topic, so that’ll definitely put Sarah on the spot. Next, Brady Black (Eric Martsolf) will be horrified by Kristen DiMera’s (Stacy Haiduk) pregnancy. He’ll need some advice from Marlena Evans (Deidre Hall) soon after the bomb’s dropped.

Thanks to Jack Deveraux’s (Matthew Ashford) total recall, he’ll be ready for a bright future with Jennifer Horton (Melissa Reeves). DOOL fans can expect some sweet family moments as Jack reunites with Jenn and JJ Deveraux (Casey Moss). Days of Our Lives spoilers they they’ll savor this bliss, which is a good idea since a time jump’s coming up this November. Anything can happen after that leap forward!

For now, Ciara Brady (Victoria Konefal) will have to fear for her life again. Jordan Ridgeway (Chrishell Hartley) clearly isn’t as recovered as her doctors thought. She’ll make another attempt on Ciara’s life, but she’ll be sneaky about it. Days of Our Lives spoilers suggest there won’t be any solid proof, but that won’t stop Ciara and Ben Weston (Robert Scott Wilson) from hurling serious accusations.

It sounds like some great episodes are coming up. We’ll keep you posted as other Days details emerge. Stay tuned to DOOL and don’t forget to check CDL often for the latest Days of Our Lives spoilers, updates and news.