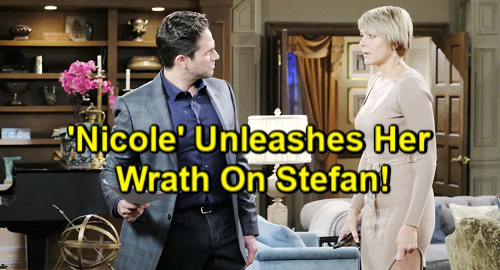 Days of Our Lives (DOOL) spoilers tease that “Nicole Walker” (Arianne Zucker) will apparently slack off on her duties again. Stefan DiMera (Brandon Barash) will once again find a reason to gripe about “Nicole’s” work – or lack thereof – at DiMera Enterprises. She’s supposed to be making Basic Black a big success, not sneaking around handling a hostage crisis.

Of course, Stefan doesn’t know the reason behind “Nicole’s” distraction. Abe Carver (James Reynolds) assumes “Nicole” is still grieving, so he urged Stefan to cut her some slack.

Stefan has tried to be patient, but Days spoilers say he’ll decide enough is enough on July 10. He may argue that if grief is indeed why “Nicole’s” neglecting her duties, then maybe she wasn’t ready to get back in the corporate game.

Fake Nicole Walker Will Not Take The News Lying Down

Regardless, Stefan will be fed up enough to fire “Nicole.” He won’t care about sparing “Nicole’s” feelings or protecting what might be a fragile heart. We support Stefan’s callous demeanor here since this is actually Kristen DiMera (Stacy Haiduk).

There’s no mourning going on since Holly Jonas (Harlow and Scarlett Mallory) isn’t dead and “Nicole” isn’t even back in town.

Nevertheless, Days of Our Lives spoilers say the fake Nicole won’t take the news very well. She’ll rip into Stefan after he cans her, so DOOL fans can expect things to escalate quickly.

It looks like Gabi Hernandez (Camila Banus) will get in the middle of this and make matters worse. “Nicole” and Gabi will spar, so Stefan may feel the need to defend his new love. That could make Kristen even more furious.

Days of Our Lives spoilers state that “Nicole” will ultimately attack Stefan – and it sounds like that means physically! Kristen can be a pretty brutal woman when she wants to be. She’s got a lot of rage built up inside her, so she’ll unleash some of it on her brother.

Stefan will have to face “Nicole’s” fierce wrath, but there’ll be a bright side for the shocked DiMera. It’ll bring him closer to Gabi and rev up the heat between them even more. We’ll give you updates as other Days details emerge. Stay tuned to DOOL and don’t forget to check CDL often for the latest Days of Our Lives spoilers, updates and news.