BY hellodrdavis on August 12, 2019 | Comments: one comment
Related : Days of Our Lives, Soap Opera, Spoiler, Television 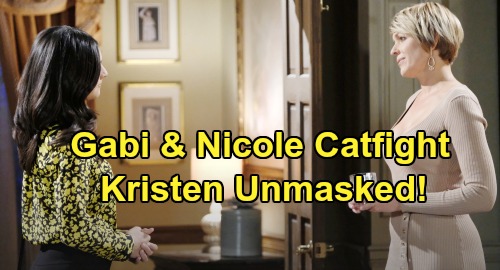 Days of Our Lives (DOOL) spoilers tease that Gabi DiMera (Camila Banus) will soon find herself in danger. She’s just taken over as CEO of DiMera Enterprises, and she’s got a big thorn in her side…Nicole Walker (Ariane Zucker). Nicole nearly took the DiMera CEO position right out from under Gabi, and she’s not going to give up trying to get her hooks into DiMera, since she’s really Kristen DiMera (Stacy Haiduk) in disguise.

Well, it doesn’t look like Kristen is going to give up trying to undermine Gabi now that Gabi’s CEO. In fact, the two ladies will remain at odds as Kristen tries to run Basic Black as Nicole, and Gabi remains suspicious about “Nicole’s” weird ongoing behavior. And since neither Gabi nor Kristen can seem to manage to keep their snippy comments in check, look for these two to do some major bickering.

In fact, DOOL spoilers indicate that one of their upcoming arguments is going to turn quite physical. Look for a big catfight to ensue, as Gabi and “Nicole” duke it out, with arms flailing and lots of grabbing going on. Of course, we have to remember that Kristen’s wearing a rubber mask that could easily get ripped or torn at the seams…and it looks like that’s exactly what’s going to happen.

According to Days of Our Lives spoilers, Gabi’s going to wind up conked over the head during the catfight, indicating that she’s going to learn something she shouldn’t, most likely that “Nicole” is wearing some sort of mask. Whether Gabi fully reveals that Kristen is under that mask remains to be seen, but it’s looking likely, since Gabi will end up unconscious on the floor.

DOOL spoilers also reveal that Stefan DiMera (Brandon Barash) will wind up unconscious on the floor right alongside Gabi, indicating that he may try to save Gabi from Kristen/Nicole and wind up getting hit upside the head himself. At any rate, both Stefan and Gabi are going to be in a dangerous situation.

In fact, Gabi and Stefan might just find themselves waking up locked in the secret room in the DiMera tunnels. DOOL spoilers indicate that the pair will soon spend some up-close-and-personal time together, during which they won’t be able to fight their feelings of love for each other. It certainly sounds like they’ll be cooped up somewhere, so the DiMera tunnels seem like the most likely place.

From there, DOOL spoilers say that Gabi will be onto Kristen and her plan, and DOOL viewers will have to wait and see exactly what Kristen has in store for her brother and Gabi. Will she visit them and reveal her plans, or will she just leave them in the secret room to wait for a rescue? Exactly how it all goes down remains to be seen, but it certainly looks like they’ll be in some serious danger.

At any rate, it looks like Gabi and Stefan will find themselves in a big predicament. How do you think they’ll get out of this mess? Stay tuned to DOOL and don’t forget to check CDL often for the latest Days of Our Lives spoilers, updates, and news.