Days of Our Lives Spoilers: Gabi Uses Fatherhood To Get Stefan Back After Massive Blowout Fight

BY Heather Hughes on May 29, 2019 | Comments: one comment
Related : Days of Our Lives, Soap Opera, Spoiler, Television 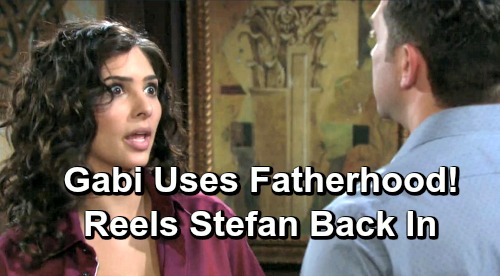 Days of Our Lives (DOOL) spoilers tease that Gabi Hernandez (Camila Banus) will hope for a clear shot at Stefan DiMera (Brandon Barash). Her recent scheme with Kate Roberts (Lauren Koslow) was obviously a huge success. Thanks to Gabi’s powers of seduction and manipulation, Chloe Lane (Nadia Bjorlin) found Stefan in bed with his sidepiece.

Since Chloe was outraged and immediately turned against Stefan, he’ll seethe over what Gabi cost him. Stefan was truly falling for Chloe and was excited about where things were headed between them. He saw the potential for stable, lasting love. That’s certainly not something Stefan had when he fell in love with Abigail DiMera’s (Kate Mansi) alter, “Gabby.”

Even though Salem believes Holly Jonas (Harlow and Scarlett Mallory) is dead, Stefan still could’ve been a father figure to Parker Jonas (Christian Ganiere). He’s wanted a family ever since he realized Charlotte DiMera wasn’t really his daughter. That father-child bond was ripped away from him, so Stefan’s still chasing the dream.

Of course, Days fans know Gabi can offer just as much as Chloe can in that department. She’s got Arianna Horton (Sydney Udell), so she can use the kid as a pawn eventually. For now, Gabi will have to deal with the consequences of her plot. Her reward is coming, but she’ll have to face Stefan’s fierce wrath first.

On June 3, Days of Our Lives spoilers say Stefan will blast Gabi with everything he’s got. He’ll blame Gabi for tearing apart his budding romance with Chloe. Gabi may turn this around on Stefan and point out that he made the move in the end. She was just about to give up and leave when Stefan grabbed her for sex.

The truth is scheme or no scheme, relationship or no relationship – these DOOL characters can’t resist each other. Just because Gabi’s plotting against Stefan doesn’t mean she’s not enjoying it. In fact, that’ll become a bigger problem in the coming weeks. Days of Our Lives say Gabi will struggle to focus on her endgame. Her feelings for Stefan will grow stronger, so they’ll definitely get in the way.

As for Stefan, Gabi may suggest he subconsciously sabotaged himself when it came to Chloe. She’ll prey on Stefan’s desires, plot her next powerplay and keep reeling him in! We’ll give you updates as other Days news emerges. Stay tuned to DOOL and don’t forget to check CDL often for the latest Days of Our Lives spoilers, updates and news.