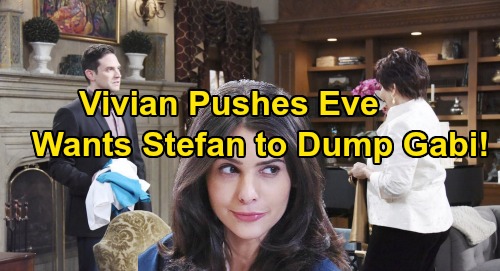 Days of Our Lives (DOOL) spoilers tease that Vivian Alamain (Robin Strasser) will do some matchmaking during the week of September 23-27. She’ll make it clear to Stefan DiMera (Brandon Barash) that she doesn’t approve of his wife and thinks he’d be better off with a different partner. Of course, Stefan won’t want to get into this with his mother. He’s crazy about Gabi DiMera (Camila Banus), so he’ll undoubtedly push Vivian to drop it.

However, Vivian is awfully stubborn and always enjoys speaking her mind. That was evident in her recent chat with Eve Donovan (Kassie DePaiva), which started off a bit tense. However, Vivian quickly saw a fire in Eve that she liked. She urged Eve to leave behind her contact information and suggested there might be a place for her at DiMera Enterprises.

It turns out Vivian wouldn’t mind Eve as part of the family either. Days spoilers say Vivian will think Stefan and Eve should be a couple. She’ll consider Eve a worthy match for her son – far more worthy than Gabi. Stefan will probably think it’s ridiculous for Vivian to play Cupid when he’s happily married.

Even so, Vivian just won’t think Gabi can be the woman Stefan needs her to be. She’ll see the spark she wants in Eve and suggest that Stefan should really cut Gabi loose. Nearby, Days of Our Lives spoilers say Gabi will listen in on their conversation. She’ll be appalled by what Vivian’s suggesting, so she may end up butting in.

Gabi isn’t the kind of gal who lets herself get pushed around, so she could intervene and defend this DOOL relationship to Vivian. Regardless, you can bet she’ll also voice her displeasure to Stefan himself. Days of Our Lives spoilers state that Gabi’s rage will erupt, so she may say some pretty nasty things about Vivian.

Stefan loves his mother, so he might rush to her defense. He may argue that Vivian is just being overprotective, which could lead to a fight for the newlyweds. The problem is Stefan will likely be killed off soon. Will Stefan and Gabi spend some of their last moments together clashing?

That could make Stefan’s death even more heartbreaking! We’ll give you updates as other Days news comes in. Stay tuned to DOOL and don’t forget to check CDL often for the latest Days of Our Lives spoilers, updates and news.