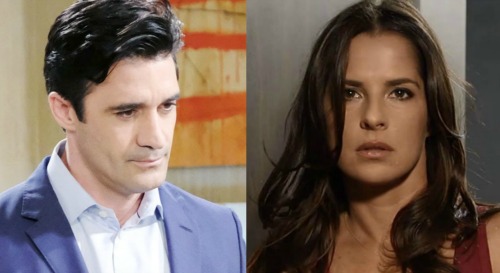 Days of Our Lives (DOOL) spoilers reveal that Ted Laurent’s (Gilles Marini) untimely passing brings a new beginning for his portrayer. Ted took a bullet to the chest and there’s not a drop of serum in sight, so this truly seems to be the end of the character. However, there’s always a chance Marini will land at another daytime drama. In fact, Marini already has his preferred costar picked out!

In a recent issue of Soap Opera Digest, Marini opened up about his DOOL experience and talked about the potential for a future soap stint. Before we get to what’s ahead, let’s hear what Marini thought about that deadly exit. Did Marini mind getting killed off?

“I actually like to die in shows, because it’s always a new birth for something else,” Marini said. “It pushes the envelope a little bit with what you can do as an actor.” He added that he’s faced deadly exits in other projects and often gets stopped by fans who were moved by his scenes. Marini feels like seeing death on TV can serve as a grim reminder of real-life losses, but it can help people cope as well.

Although Marini joked about Ted maybe having a twin that could enter the picture, he also would love to do another soap opera. “Absolutely,” Marini insisted. “If the experience is anywhere near the experience I had on Days of Our Lives, yeah. Who knows? Maybe working with Kelly Monaco (Sam, GH) ‘cause I’ve known her a long time because of Dancing With the Stars.”

Marini pointed out that he’d never an opportunity to work with Monaco before, but he’d really like to. They were both featured on season 15 of Dancing With the Stars: All-Stars back in 2012. Marini suggested he would definitely think about it if the chance to do General Hospital presented itself.

Of course, Days of Our Lives wasn’t Marini’s first soap rodeo. He played an Italian bicycle rider on Passions back in 2006. Marini also played some small roles on The Bold and the Beautiful in the mid-2000s. He came back to B&B as a doctor for a couple episodes in 2017.

It’d be interesting to see what kind of character General Hospital might write for Marini. Maybe they should throw him in the mix and grant his wish to act with Monaco! Would you like to see Marini keep his soap career going?