Days of Our Lives Spoilers: Nicole Loses It on Marlena – Fierce Outburst Puts Kristen’s Longtime Enemy Hot on the Trail 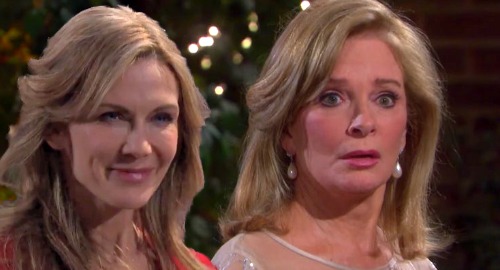 Days of Our Lives (DOOL) spoilers tease that John Black (Drake Hogestyn) will decide to do something special for “Doc.” DOOL fans know John adores Marlena Evans (Deidre Hall), so he likes to let her know! He can be awfully romantic when he brainstorms sweet surprises. John has another one coming up during the week of August 12-16, so he’ll be careful not to tip off his love.

Marlena’s also eager to keep the romance alive, so she’ll plan a surprise of her own that same week. She’ll want John to know he’s loved too, which means they’ll be scheming behind each other’s backs – for a good cause of course! Days of Our Lives spoilers say there’ll be some fun strategizing and string-pulling as they work to get things ready.

Soon after, John and Marlena will be all set for their romantic evening together. Unfortunately, there could be a huge obstacle standing in their way, and her name’s Kristen DiMera (Stacy Haiduk). Marlena’s longtime enemy could be a real problem, but she won’t even know it’s her – at least not yet.

However, this could be the beginning of major “Nicole DiMera” (Arianne Zucker) suspicions. Days of Our Lives spoilers say Chloe Lane (Nadia Bjorlin) will reach out to Marlena for help next week. She’ll think “Nicole” is out of control and in desperate need of therapy. Chloe will feel like Marlena may be the only one who can get through to “Nicole” and put her on a healthier path.

Marlena will listen to Chloe’s concerns and realize she has to try something. She won’t want to leave “Nicole” feeling lost and alone. Days spoilers state that Marlena will reach out to “Nicole,” not realizing it’s actually Kristen. That conversation obviously won’t go well at all. “Nicole” will explode and could potentially let a clue slip about her true identity.

Marlena won’t put it together yet, but she’ll definitely see some red flags here. She might learn some hint that’ll become crucial later. Regardless, Days of Our Lives spoilers say “Nicole” may temporarily rain on “Jarlena’s” surprise parade. Kristen will be fed up and ready to unleash more mayhem, so John and Marlena had better watch out!

It sounds like some great drama’s ahead on the NBC soap. We’ll give you updates as other Days news comes in. Stay tuned to DOOL and don’t forget to check CDL often for the latest Days of Our Lives spoilers, updates and news.