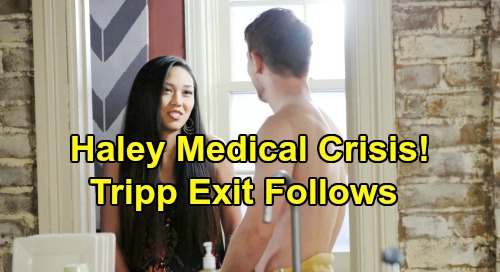 Days of Our Lives (DOOL) spoilers reveal that Haley Chen (Thia Megia) will continue to battle the dark corners of her mind. The trauma she endured thanks to Claire Brady (Olivia Rose Keegan) really took a toll. Haley’s had some PTSD symptoms, which Tripp Dalton’s (Lucas Adams) been helping her cope with. He even lied to score Haley some tranquilizers in hopes that she could get some sleep.

However, things will get worse for Haley before they get better. Days of Our Lives spoilers say a shocking emergency’s coming up during the week of August 12-16. A medical crisis will strike for Haley, so there’s a good chance Tripp will have to leap into action. It’s also possible JJ Deveraux (Casey Moss) will take the lead, but it makes more sense to have Tripp do it this time around.

JJ saved the day after Haley nearly took her own life. She’s no longer suicidal, but there’s still a chance Haley will accidentally take too many tranquillizers or perhaps have an adverse reaction to them. Then again, maybe Haley will have a panic attack or something along those lines. She might struggle to breathe and leave Tripp terrified.

Of course, Haley may be wary of going to the hospital and making it seem like she has more mental issues. After her previous suicide attempt, Haley won’t want any additional red flags. Even so, Haley may be hospitalized if this emergency is bad enough. Days of Our Lives spoilers make it sound quite serious, so Tripp may have to go against Haley’s wishes here.

DOOL fans can expect Tripp’s feelings for Haley to grow, which could play a role in his looming Days exit. He may feel like he’ll be stuck pining if he remains in Salem. Although Haley considers Tripp a close friend, JJ still seems to have her heart at this point. Tripp’s feelings would be mostly one-sided, so it’s best if he backs off.

Once JJ’s brought in the loop on Haley’s latest problems, he should be able to handle them. Tripp may make sure Haley’s in good hands and opt to bail eventually. Then again, there might be some other big incident that ultimately takes Tripp off canvas. Regardless, Days of Our Lives spoilers say Tripp’s final airdate will be August 27, so we’re nearing the end of the road.

Will Haley have to be rushed to the hospital following her medical crisis? Will you miss Tripp when he’s gone? We’ll give you updates as other Days news comes in. Stay tuned to DOOL and don’t forget to check CDL often for the latest Days of Our Lives spoilers, updates and news.