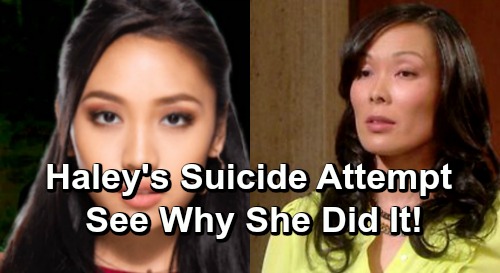 Days of Our Lives (DOOL) spoilers tease that Haley Chen (Thia Megia) will have some tough times ahead of her. Haley attempted suicide on Christmas Eve, but luckily JJ Deveraux (Casey Moss) found her and saved her life. Clearly, Haley was running from a very big problem when she tried to kill herself, but the problem has thus far been a mystery to viewers.

But some recent events and upcoming Days spoilers may shed light on what might have caused Haley to try to take her own life. Before she took the bottle of pills on Christmas Eve, Haley was talking on the phone with an unknown person. She was clearly upset by the conversation, and it seemed like she was sorry for something she had done.

And then, after Haley was approached by Kayla Johnson (Mary Beth Evans) about her on-the-job suicide attempt, Haley was again shown on the phone, telling the person on the other end that she “wouldn’t say anything” to Dr. Johnson.

Could it have been a member of her family that she was talking to? That seems plausible, especially in light of the Days of Our Lives spoiler stating that Haley will have a connection to an existing Salem resident. TPTB seem to be setting up some family drama for Haley.

We also know that Haley will soon have a conversation with Melinda Trask (Laura Kai Chen), Salem’s district attorney, during which Melinda will tell Haley to “take care of” JJ. Days buzz is that Melinda could be a relative of Haley’s, perhaps even Haley’s mom.

If that’s the case, then it certainly looks like there may be family secret that Melinda wants Haley to protect. Melinda is a pretty high-profile person in Salem…could it be that she doesn’t want the word to get out that her daughter attempted suicide, or perhaps that Haley did something before her suicide attempt that might embarrass Melinda if it gets out?

There’s clearly something that Melinda wants Haley to keep a lid on. What do you think it could be? Stay tuned to DOOL and don’t forget to check CDL often for the latest Days of Our Lives spoilers, updates, and news.