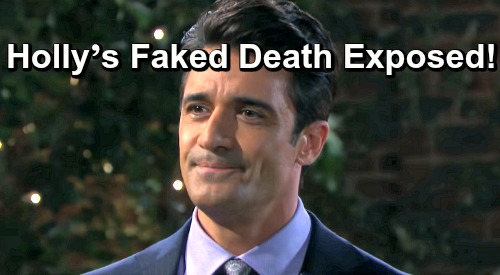 Days of Our Lives (DOOL) spoilers tease that Ted Laurent (Gilles Marini) and Kate Roberts (Lauren Roberts) will grow closer in that secret room. They shared a deep connection once upon a time, but Kate’s been bitter about Ted’s betrayal for quite a while now. Thankfully, the tension is lifting. Ted reminded Kate of his apology, and she seemed to soften a bit – as much as Kate can soften anyway!

Things will continue to move in the right direction, so it should come as no surprise that Ted and Kate will get passionate. They’re intense people with intense feelings, so it’s only natural for them to rekindle their spark. Days of Our Lives spoilers say Kate and Ted will heat things up on July 5, so they could be on the verge of a real romantic reunion.

However, Ted could blow everything by divulging his deep, dark secret. Pitching in on the plot to fake Holly Jonas’ (Harlow and Scarlett Mallory) death was one of the worst decisions Ted’s ever made. He’d faced a lot of guilt because of it, which was part of the reason he decided to swipe the autopsy report and share the real results with “Nicole Walker” (Arianne Zucker).

Of course, Ted also wanted to impress Hope Brady (Kristian Alfonso), but he no doubt felt like it’d be a relief to make a confession. That plan didn’t work out very well for Ted, but that won’t stop him from making another admission – perhaps a more complete one this time. Days of Our Lives say Ted will come clean during the week of July 8-12. He’ll decide to unburden himself to a floored Kate.

Once Kate wraps her head around the news, she’ll undoubtedly blast Ted for doing something so cruel. DOOL fans know Kate missed out on so much time her own children, Billie Reed (Lisa Rinna) and Austin Reed (Austin Peck), whose deaths were also faked. It’s tough to believe she’d go easy on anyone who tried to rip a little girl away from her mother. This situation will hit far too close to home.

Plus, Kate will realize Ted’s the reason they’re both in this mess. She might argue that if Ted had just gone to the authorities right away and shut all this down, they wouldn’t be stuck in the DiMera tunnels facing potential death. Just because Xander Cook (Paul Telfer) hasn’t killed them yet doesn’t mean Kate’s certain he won’t!

Fortunately, Days spoilers say Kate will live to tell the tale, and there’s a good chance Ted will, too. Their romantic reunion, on the other hand, may be over before it ever really begins. Ted’s set to leave Salem soon, so he won’t have a lengthy future with Kate.

It sounds like some exciting drama’s brewing on the NBC soap. We’ll give you updates as other Days details emerge. Stay tuned to DOOL and don’t forget to check CDL often for the latest Days of Our Lives spoilers, updates and news.