Days of Our Lives Spoilers: Hope Busts Ted – Discovers Holly Kidnapping Lies, Kicks Him Out Of Her Life 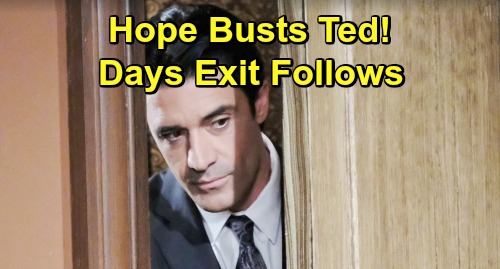 Days of Our Lives (DOOL) spoilers tease that Hope Brady (Kristian Alfonso) will soon be on a mission. After months of fending off Ted Laurent’s (Gilles Marini) romantic advances, Hope finally received her divorce papers, signifying the end of her marriage to Rafe Hernandez (Galen Gering). And she decided to immediately take the plunge and agree to see Ted, sealing the deal with a big smooch at Doug’s Place.

Well, it looks like Hope and Ted will enjoy some time together, and Hope will be feeling confident that Ted’s shady past is behind him. But as DOOL viewers know, Ted is knee-deep in trouble right now, and he’s keeping an explosive secret from Hope. He and Kate DiMera (Lauren Koslow) are falsely claiming that Stefan DiMera (Brandon Barash) had them kidnapped.

In Ted’s defense, Hope’s life has been threatened by Kristen DiMera (Stacy Haiduk), who was really behind the kidnapping, so it’s somewhat understandable that Ted would keep Kristen’s existence from Hope. But on the other hand, that’s not all that Ted’s hiding.

Ted also was part of the conspiracy to fake Holly Jonas’ (Harlow and Scarlett Mallory) death. Ted knows good and well that Holly is alive and out there living with some other family. That’s a huge secret to be keeping, and Hope’s going to be peeved when she finds out about it.

It looks like it may not be long before Hope finds out about Ted’s secrets and lies. According to Days of Our Lives spoilers, Hope will get tipped off about some discrepancies in Ted’s story – presumably about his kidnapping – by Will Horton (Chandler Massey). Perhaps Ted will run into Will and say something that doesn’t add up.

Whatever the case, Hope will suddenly be faced with the possibility that Ted may be keeping some secrets and involved in something devious. So, she’ll decide to do some sleuthing on her own. She’ll put her detective skills to good use and wind up in Ted’s apartment, snooping around.

According to Days of Our Lives spoilers, what she finds will expose Ted’s deception. Of course, which deception is exposed remains to be seen. She could discover his role in Holly’s abduction and “death,” or the fact that Holly’s alive, or the fact that Ted and Kate’s true captor was Kristen.

Whatever she finds, she’s surely not going to be happy about it. And given that Gilles Marini, who portrays Ted, is slated to leave the show sometime this summer, that could indicate that he’ll leave town, perhaps after Hope kicks him to the curb. Their relationship will certainly be doomed after Hope’s big discovery.

At any rate, Ted’s days on the show are numbered, so something’s going to drive him out of Salem. Do you think it will be Hope? Stay tuned to DOOL and don’t forget to check CDL often for the latest Days of Our Lives spoilers, updates, and news.