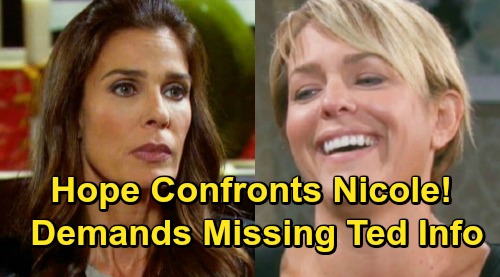 Days of Our Lives (DOOL) spoilers tease that Hope Brady (Kristian Alfonso) will grow suspicious. When she realizes Ted Laurent (Gilles Marini) has suddenly vanished, Hope will wonder what’s up. Ted was extremely interested in starting a deep relationship with Hope. He feels a real spark, so he was doing everything in his power to set up a bright future together.

Furthermore, Ted left a message regarding some good news he had for “Nicole Walker” (Arianne Zucker). His voicemail suggested he’d tell “Nicole” followed by Hope soon after. Days spoilers say Hope will be curious why Ted never showed up. When her calls go unanswered and Ted’s nowhere to be found, Hope will decide to take matters into her own hands and grill “Nicole.”

Days of Our Lives spoilers state that Kristen DiMera (Stacy Haiduk) will have another pest to deal with. She’ll order Xander Cook (Paul Telfer) to get rid of the first one, but he’ll drag his feet on murdering Ted. Xander will develop a soft spot for the guy during his time in captivity. He’ll likely find a different strategy – like dropping Ted back on that faraway island.

As for Kristen, she’ll tackle the problem of Hope’s nosiness herself. Days of Our Lives spoilers say Hope will wonder if “Nicole” has seen Ted. She may ask what news he had for her, but Kristen could play dumb. “Nicole” may lie that she never saw Ted and certainly never got any important updates.

Then again, a bogus explanation would work here as well. The point is Kristen will want Hope off her back. Of course, Hope will always be a detective at heart. She’ll be determined to get to the bottom of Ted’s disappearance, so what’s Kristen going to do? DOOL spoilers say Kristen will need a tactic to handle this new threat.

Perhaps Kristen will use Ted’s phone to provide a breakup message or something along those lines. She might make it look like Ted got tired of waiting around. Even so, it’s doubtful Hope will completely back off. If Kristen thinks she’s done with this issue, she may be quite mistaken. Hope could easily keep digging, which could put the Holly Jonas (Harlow and Scarlett Mallory) secret in jeopardy.

It sounds like Hope’s search for answers could lead to trouble! Kristen will attempt to throw Hope off the trail on June 28, but this storyline will continue to heat up. We’ll keep you posted as other Days details emerge. Stay tuned to DOOL and don’t forget to check CDL often for the latest Days of Our Lives spoilers, updates and news.