Days of Our Lives Spoilers: Jack Plays Dirty Against Abe – Uses Sheila Against Him In Mayoral Race

BY hellodrdavis on April 14, 2019 | Comments: one comment
Related : Days of Our Lives, Soap Opera, Spoiler, Television 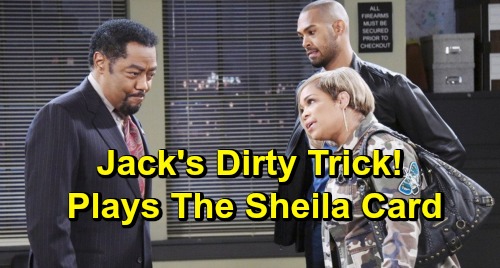 Days of Our Lives (DOOL) spoilers tease that Jack Deveraux (Matthew Ashford) will crank up the heat on incumbent Abe Carver (James Reynolds) in the mayoral race. Abe is a stand-up guy, and while he doesn’t care for the new version of Jack, it wouldn’t occur to him to run a dirty campaign. Abe’s all about campaigning on the issues and debating ideas, not about mud-slinging.

But it doesn’t look like Jack feels the same way. With Eve Donovan (Kassie DePaiva) calling the shots as his campaign manager, Jack has done and said a lot of things that the old Jack never would have done or said. For example, the old Jack would never have gone after Haley Chen (Thia Megia) in the way that he did. But things have changed, and now Jack’s out for blood.

According to Days of Our Lives spoilers, Jack will soon find a new angle of attack against Abe. Jack knows that Abe is beloved by a lot of people in Salem, so he needs to do something to cast doubt on Abe’s judgment. Unfortunately, it looks like he’ll question Abe’s judgement when it comes to Sheila Watkins (Tionne Watkins).

At the first mayoral debate, Jack tried to make a big deal of Abe’s decision to hire Sheila, given Sheila’s criminal past and her mistake in handing over crucial evidence to Xander Cook (Paul Telfer). But Sheila nipped that in the bud by explaining that she’s paid her debt to society and that her mistake shouldn’t reflect on Abe, so it’s doubtful that Jack will try to go after Sheila on those grounds again.

But Days of Our Lives spoilers indicate that Jack will spot a moment between Abe and Sheila. Viewers know that these two have been getting closer lately, and it’s clear that they feel attracted to each other. It looks like Jack will pick up on this, and he’ll likely decide to use that to his advantage.

For example, Jack could make an accusation against Abe saying that he is having an inappropriate relationship with his employee. Jack could argue that in the age of #MeToo, such a relationship is highly suspect and could cost the taxpayers a considerable amount of money if the relationship ends badly and a lawsuit ensues.

Further, Jack could argue that having such a relationship with one’s employee shows a lack of judgment on Abe’s part. It’s something that would cause Abe a lot of stress and that he would have to publicly defend, and it would probably get some voters riled up. But most of all, it would just make trouble for Abe and distract voters from the real issues.

We’ll see if Jack decides to go there, but with Eve’s urging it’s probably where he’s headed. Do you think that Jack will win the election with his dirty tactics? Stay tuned to DOOL and don’t forget to check CDL often for the latest Days of Our Lives spoilers, updates, and news.