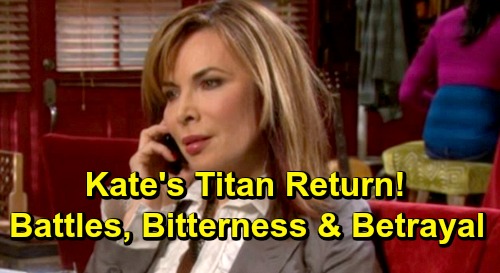 Days of Our Lives (DOOL) spoilers tease that Kate DiMera (Lauren Koslow) will soon be causing a stir. She’s been all over Victor Kiriakis (John Aniston) lately, wanting to come back to Titan in an executive role. Of course, Kate and Victor aren’t the best of pals, but they do have a mutual enemy…Stefan DiMera (Brandon Barash). Kate would like nothing more than to bring Stefan down, and she’d like to do so with the backing of Titan.

At first, Victor told Kate to go take a flying leap, but he’s starting to soften up to the idea of Kate coming to work for him. And it looks like before long he’ll be vying for Kate to return to Titan. But there are a couple of problems with the plan. First off, there’s Brady Black (Eric Martsolf), who will offer some serious resistance to the idea of working with Kate.

According to Days of Our Lives spoilers, Brady’s going to have a bit of an ego problem. Since he assumed the position of CEO of Titan, he’s been on a power trip, and he’s probably not going to want to share his power with Kate. Kate has a very strong personality, and she’s not exactly a team player when it comes to business. And neither is Brady, for that matter.

It looks like Victor is going to get some major pushback from Brady on the Kate issue. Brady just won’t want to play nice with Kate, and as CEO he will want Victor to respect his authority. After all, Victor put his trust in Brady to be CEO, so Brady will want Victor to let him run Titan as he sees fit. This will certainly annoy Victor, who will just want Brady and Kate to get along and work together to take down Stefan.

But Brady’s not the only person who will be clashing with Kate. According to Days of Our Lives spoilers, Maggie Kiriakis (Suzanne Rogers) will take issue with the arrangement that Victor wants for Kate. Maggie doesn’t really like Kate hanging around Victor, and she’d rather that Victor not get drawn into Titan business anymore, especially if it involves taking down Stefan.

Maggie would rather that Victor enjoy their life together and not act like that ruthless businessman that he is. But Victor’s got to be Victor, and it looks like he’ll go ahead with his Stefan takedown plan with Kate. Look for some major clashes between Maggie and Kate going forward.

Do you think Victor and Kate will be successful in their plan to go after Stefan and DiMera Enterprises? Stay tuned to DOOL and don’t forget to check CDL often for the latest Days of Our Lives spoilers, updates, and news.