BY hellodrdavis on October 15, 2019 | Comments: one comment
Related : Days of Our Lives, Soap Opera, Spoiler, Television 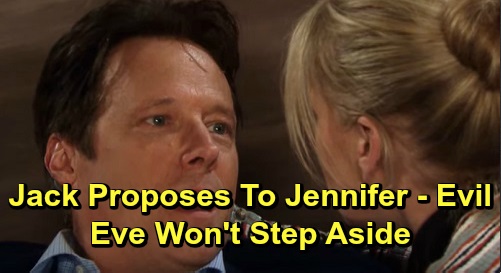 Days of Our Lives (DOOL) spoilers tease that Jack Deveraux (Matthew Ashford) will be feeling on top of the world. As DOOL viewers know, he and Jennifer Horton (Melissa Reeves) were recently reunited after Jack got his memories back. After a terrible struggle with Henry Shah (Piter Marick), Jack hit his head and the memories just came flooding back. He and Jennifer were thrilled to reunite, and Jack is absolutely overjoyed to have his life back. He’s ready to close the door on the “amnesiac Jack” portion of his life.

Jack had an emotional reunion with his son JJ Deveraux (Casey Moss), too. He did his best to make amends for his actions since he returned to Salem. As DOOL viewers know, Jack treated JJ pretty badly, and he really went after JJ’s girlfriend Haley Chen (Thia Megia) in a terrible way. Haley was nearly deported due to Jack’s actions, but Jack has since apologized for his behavior and JJ readily forgave him. Jack, Jennifer, and JJ have had some great family moments together.

Well, it seems that Jack will soon want to officially be back together as a couple with Jennifer. Sure, they’ve kissed a couple times, but it doesn’t seem like they are officially back together. Plus, as soon as Jack got his memories back, Julie Williams (Susan Seaforth Hayes) had her heart attack and that has basically consumed Jennifer and Jack. Once Julie has had her heart transplant and is out of the woods, DOOL spoilers say that Jack will make a big move.

Jack will decide that he not only wants to be back with Jennifer, he wants to re-marry her. According to Days of Our Lives spoilers, Jack will decide not to waste any time, and he’ll propose to Jennifer! Whether Jennifer accepts remains to be seen, but we think there’s an excellent chance she’ll readily say yes and want to reclaim her life as Mrs. Jack Deveraux. She probably won’t want to waste another minute apart from her true love, and Jack will of course feel the same.

However, there will be a wrinkle in their plan to marry. Jack is still officially married to Eve Donovan (Kassie DePaiva), so for Jack to marry Jennifer, he’ll have to divorce Eve. Of course, he decided to divorce Eve several weeks ago after she destroyed the memory serum and burned Dr. Wilhelm Rolf’s (William Utay) diary right in front of him. But Eve is bitter – she’s mad that Jack wanted to regain his memories, and she’s got revenge on her mind.

As DOOL viewers know, Eve almost left town with Vivian Alamain (Robin Strasser) when Vivian was fleeing on a private jet after the death of her son Stefan DiMera (Brandon Barash). Eve had basically given up on Salem and was ready to leave and put the town and everyone in it behind her. But Vivian encouraged Eve to stay and fight for herself…and get revenge on those who had wronged her. And that won’t be good for Jack and Jennifer.

According to DOOL spoilers, Eve will refuse to just hand Jack a divorce. She won’t sign the divorce papers and give Jack an easy divorce – rather, it looks like she’ll be obstinate and draw out the whole process, probably dragging Jack to court and causing a huge scandal. Jack’s still the mayor, so a messy divorce won’t look good, but that likely won’t be Eve’s real motivation. She’ll want to prevent Jack and Jennifer from getting married and having their happily-ever-after.

It will be interesting to see just how long Eve plans to drag out the divorce proceedings, but hopefully Jack and Jennifer won’t let her legal wrangling get in the way of their happiness. How long do you think Eve will be able to drag out the divorce proceedings? Stay tuned to DOOL and don’t forget to check CDL often for the latest Days of Our Lives spoilers, updates, and news.