BY hellodrdavis on December 28, 2019 | Comments: one comment
Related : Days of Our Lives, Soap Opera, Spoiler, Television 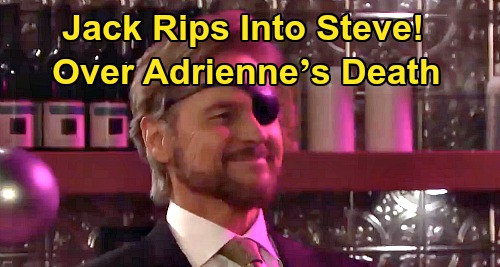 Days of Our Lives (DOOL) spoilers tease that a few key residents of Salem won’t know what hit them on New Year’s Eve. As DOOL viewers know, Stefano DiMera is now inhabiting Steve Johnson’s (Stephen Nichols) body, and he’s just been discovered by Hattie Adams (Deidre Hall). And even though “Stevano” and Kate Roberts (Lauren Koslow) managed to convince Hattie to keep quiet, they know it’s only a matter of time before Hattie blabs to someone.

So, according to DOOL spoilers, Kate will suggest that Stefano just go ahead and make himself known in Salem, adopting the persona of Steve. And so, on New Year’s Eve, Stevano will head to Julie’s Place and make himself known…as Steve. And as you can imagine, this is going to cause a real stir, especially for Kayla Brady (Mary Beth Evans), who will have some serious questions for Steve.

As far as Kayla knows, Steve completely abandoned her, so she’s going to have some words for her ex-husband. She’ll probably want to know why Steve left her, and importantly, why he didn’t come to her to talk through their problems. It looks like Stefano will have a lot to handle as Kayla starts firing questions at him right and left.

But Kayla isn’t the only person who Stefana is going to have to deal with. That will be unpleasant enough, but there will be someone else who will have some choice words for him, and that’s Steve’s brother Jack Deveraux (Matthew Ashford). As Days viewers know, their sister Adrienne Kiriakis (Judi Evans) was tragically killed several months ago, and as far as Jack and the rest of Salem knows, Steve callously chose not to attend her funeral or communicate with her family at all after the tragedy.

According to Days of Our Lives spoilers, Jack will rip into “Steve,” and Stefana is going to be on the receiving end of Jack’s fury. Jack will probably blast his brother for disrespecting the family and their sister’s memory, but he won’t realize that he’s actually talking to Stefano. Of course, Stefano isn’t one to be talked to like that, so he’ll probably struggle to keep his temper and respond in a Steve-like way.

And since he’ll be hanging around Princess Gina Von Amberg aka Hope Brady (Kristian Alfonso) and Kate quite a bit, people will probably think that’s strange, too. It could actually get more difficult over time for Stefano to pull off this ruse, but he really needs to keep it going, because as soon as everyone realizes that he’s really Stefano, they’re going to fight to get Steve back, which will threaten Stefano’s existence.

How long do you think Stefano will be able to keep his “Steve” ruse going? Stay tuned to DOOL and don’t forget to check CDL often for the latest Days of Our Lives spoilers, updates, and news.