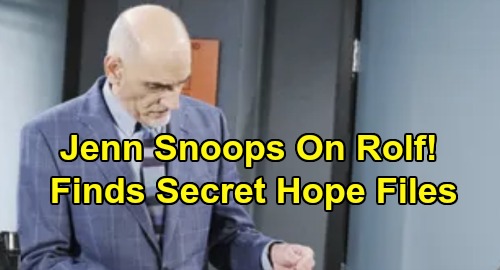 Days of Our Lives (DOOL) spoilers tease that Jennifer Horton (Melissa Reeves) will soon go looking for answers. As DOOL viewers know, Dr. Wilhelm Rolf (William Utay) is on some sort of mission against Hope Brady (Kristian Alfonso). He recently performed some procedure with a scalpel on her after injecting her with the contents of a syringe and causing her to pass out. Ever since then, Hope hasn’t seemed herself. She’s lethargic and just not feeling like herself.

Well, many DOOL viewers suspect that this is the beginning of Rolf turning Hope back into Princess Gina (Kristian Alfonso) for nefarious reasons. When he had Hope passed out in the lab, he berated her for her past murder attempt on Stefano DiMera (Joseph Mascolo) and expressed considerable loathing toward her. He might be seeking to utterly eradicate Hope from existence and bring Princess Gina back in her place!

Already, others in Hope’s life have noticed that she’s just not herself. Marlena Evans (Deidre Hall) and John Black (Drake Hogestyn) have sensed that something’s off with Hope – she sits and stares blankly into space and doesn’t want to spend time with them, which is unusual for Hope. It seems that Jennifer will soon be noticing some changes in her cousin and best friend, too, and Rolf’s name will come up in connection with it, since Hope will soon recall pieces of her strange encounter with Rolf.

It seems that Jennifer will take it upon herself to find out what’s going on with Rolf and exactly what he has to do with Hope and how she’s been feeling lately. Jennifer won’t really trust Rolf – no one seems to, and with good reason – even though it wasn’t long ago that she was relying on him to make a serum to bring back Jack Deveraux’s (Matthew Ashford) memory. She’ll apparently put her investigative skills to good use and seek some answers.

First off, DOOL spoilers say that Jennifer will grill Rolf. She may want to know exactly what he was doing with Hope at the hospital, and she may not buy his story about finding Julie Williams’ (Susan Seaforth Hayes) rosary lying around the hospital. She’ll think there’s more than meets the eye when it comes to Rolf’s intentions with Hope, but she just won’t know what he’s been up to.

Next, DOOL spoilers say that Jennifer will go snooping, possibly around the lab where Rolf used to work at the hospital. Of course, Rolf got thrown out of the lab by Kayla Johnson (Mary Beth Evans) recently, but it’s likely that his personal things and equipment are still there. It looks like Jennifer will take it upon herself to rummage through his things, and she’ll stumble upon a flash drive that she thinks might hold some answers.

But what will Jennifer find on the flash drive? Chances are, whatever’s on the drive won’t be readily interpretable. After all, this is Rolf that we’re talking about, so things may be in code or they could be encrypted in a way that’s difficult to open. We’ll see what Jennifer finds, and what secrets Rolf is keeping. Clearly he’s got an agenda, but the trick will be to find a way to reveal what it is.

What do you think Jennifer will find on Rolf’s files? Stay tuned to DOOL and don’t forget to check CDL often for the latest Days of Our Lives spoilers, updates, and news.