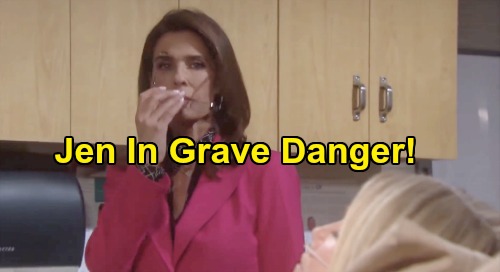 Days of Our Lives (DOOL) spoilers tease that Abigail DiMera (Kate Mansi) will have a big request, and it’s one that may put her mother’s life in danger. As DOOL viewers know, before the time jump, Princess Gina Von Amberg (Kristian Alfonso) pushed Jennifer Deveraux (Melissa Reeves) off of the bistro balcony, sending her into a year-long coma.

Jennifer had just discovered that Wilhelm Rolf (William Utay) had implanted Princess Gina’s memories and personality into Hope Brady’s (Kristian Alfonso) brain. And since Princess Gina was desperate to stop Jennifer and preserve her own existence, she had to act fast. Then Princess Gina managed to alter the security footage from the bistro to make it look like Eve Donovan (Kassie DePaiva) had committed the crime.

Now Eve is in prison, where she’s been for the better part of a year, and she’s desperate to prove her innocence, but she needs help. As DOOL viewers know, Eve contacted Abby and had a very scary tale to tell – she told Abby that she didn’t push Jennifer and that the person who did is still out there on the loose. That gave Abby pause, and she started to believe that perhaps Eve is telling the truth.

Of course, there’s a wrinkle here, and that’s that the police commissioner is now Hope, who’s really Princess Gina pretending to be Hope. Abby obviously doesn’t know this, and she’ll go to who she thinks is Hope with a big favor – she’ll want to reopen Jennifer’s case and see where Eve’s tale about being framed takes her.

But according to Days of Our Lives spoilers, Abby will get a surprising response from “Hope,” who will seriously resist reopening Jennifer’s case. Princess Gina will probably offer the typical rationale for not reopening the case – lack of resources and the fact that security footage shows that Eve is the one who was in the bistro that night alone with Jennifer. But will Abby let it go? Probably not, considering that she’s a reporter with her mother’s instinct for a story.

And if Abby pursues the matter, then that could put her directly in danger from Princess Gina, who has been enjoying living her life as Hope for a year now and doesn’t want to get caught. She’s got big plans for herself and John Black (Drake Hogestyn), and she won’t want it to be known that she was the one who pushed Jennifer, or that she’s even Princess Gina.

Of course, Jennifer is probably in terrible danger from Princess Gina as well, as she’s been ever since she woke up from her coma. And if Abby starts to look into the possibility of Eve being framed, that will probably lead her directly to the doctored security footage. If Abby gets that far, then Princess Gina will probably be one step ahead of her, unless Abby senses that “Hope” may be hiding something.

We’ll see what happens here, but it certainly looks like both Abby and Jennifer could be in big danger going forward. Do you think that Abby will get to the bottom of what really happened to Jennifer? Stay tuned to DOOL and don’t forget to check CDL often for the latest Days of Our Lives spoilers, updates, and news.