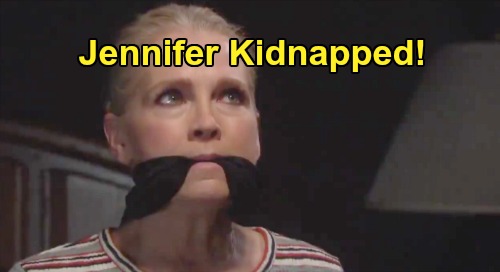 Days of Our Lives (DOOL) spoilers tease that Jack Deveraux (Matthew Ashford) will get his memories back, but his mission will come at a price. Getting mixed up with Dr. Wilhelm Rolf (William Utay) is always risky. He a pretty twisted doc due to all his devious DiMera activities. However, Dr. Rolf may be Jack’s last hope at remembering his past. Jack is desperate, so teaming up with Dr. Rolf is the way to go.

Jennifer Horton (Melissa Reeves) is perhaps even more desperate than Jack, but she’ll be at risk as this plan moves forward. Days spoilers say Jennifer will be targeted, so the danger will rev up. DOOL’s fall promo shows Jennifer bound and gagged. She’ll be kidnapped and held hostage somewhere, so that’ll obviously cause a happily ever after hurdle for Jack and Jenn!

Fortunately, this ordeal could also bring the pair closer. Days of Our Lives spoilers state that Jack may play the hero. It looks like he’ll come to Jennifer’s rescue when she needs him most. Jack may not have his memories, but there are some subconscious ones just under the surface. He’s remembered tiny hints of his history, so Jack’s still in there somewhere.

If Dr. Rolf goes rogue and ultimately refuses to help Jack, the power of Jenn’s love could still bring his memories back. There’s a chance Dr. Rolf will even be Jennifer’s kidnapper. If she tries to stop whatever madness Dr. Rolf cooks up, he may feel he has no choice.

To get Dr. Rolf to return to Salem with them, they had to give him funding and total independence. That sounds dangerous since there’s no predicting how far Dr. Rolf will go in the name of science. Dr. Rolf could push Jack and Jennifer too far, which would lead him to push right back.

Of course, we know Eve Deveraux (Kassie DePaiva) is furious with Jack and will plot to destroy his bliss. Jennifer also happens to be Eve’s longtime enemy, so we wouldn’t rule Eve out as the kidnapper either. She could easily see that Jack’s on the verge of getting everything he wants and take drastic action to prevent it.