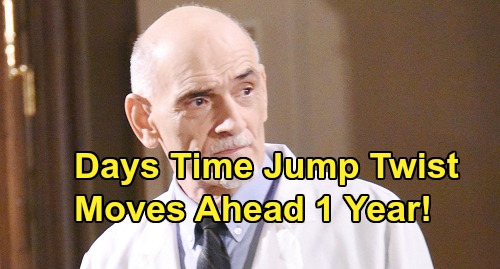 Days of Our Lives (DOOL) spoilers tease that a huge shocker is brewing in Salem. DOOL’s fall promo promised a twist never before seen in daytime drama. Days fans started speculating on social media, but it didn’t take long for those with the scoop to start spilling. Although the show hasn’t confirmed anything, reliable insiders have shared the twist – and it’s a real doozy.

It looks like Days of Our Lives will jump into the future! Now some of you might be complaining that All My Children already did a time jump. However, DOOL’s promo seems correct in saying that it’s never before seen in daytime drama; AMC’s time jump didn’t air until the show’s online reboot.

If there’s some other forgotten time jump that someone wants to bring up, Days probably has an answer for that. There could be some twist in how this time jump comes about. With Dr. Wilhelm Rolf (William Utay) around, some fun sci-fi madness could occur. Days of Our Lives spoilers say there’ll be some complications at the new lab, so perhaps Dr. Rolf will cause this time glitch.

In that case, it would be a never-before-seen storyline no matter what. The mad-scientist time travel element would make the plot unique. Regardless, it’s pretty much a done deal that this time jump is happening.

The length of the jump is less certain, but we’re hearing that it’ll be one year. Days of Our Lives viewers are bound to be torn about this. It’ll create some great buzz for the show and will shake up the canvas, but it could also ruin many popular couples.

Will Ben Weston (Robert Scott Wilson) and Ciara Brady (Victoria Konefal) still be together? What about Nicole Walker (Arianne Zucker) and Eric Brady (Greg Vaughan), who are poised to reunite? Eli Grant (Lamon Archer) and Lani Price (Sal Stowers) are set to get married soon, but will they survive the jump? There’ll be plenty of changes, so it’ll be interesting to see who’s paired up once the twist plays out.

Time Jump Could Pay Off With Some Exciting Momentum

There’s also the looming baby drama to consider. Sarah Horton (Linsey Godfrey) is about to learn she’s pregnant, and Kristen DiMera (Stacy Haiduk) appears to be cooking up a baby scheme of her own. It’ll be nice to skip the usual buns in the oven and get right to the good stuff.

There’ll be some other potentially positive shifts as well. Perhaps Sarah will have forgotten all about Eric and moved on with Xander Cook (Paul Telfer) by then. At least “Xarah” shippers hope so! This time jump is a risky move, but let’s hope it’ll pay off with explosive action and exciting momentum.

What do you think about this big Days twist? Are you on board with a time jump or do you think it’s a bad idea? We’ll give you updates as other news comes in. Stay tuned to DOOL and don’t forget to check CDL often for the latest Days of Our Lives spoilers, updates and news.