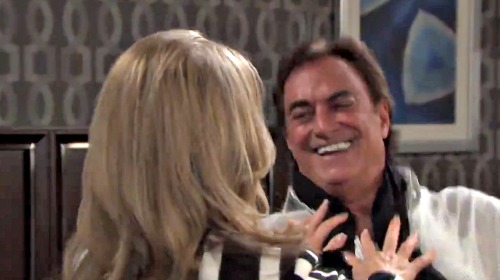 Days of Our Lives spoilers reveal Tony DiMera will be leaving Salem soon. Actor Thaao Penghlis confirmed the exit in a comment on Instagram. Fans are going to be disappointed to see him go. Here are five reasons why Tony should stay in Salem.

The DiMera family is dwindling. Even though the writers are bringing back dead characters to make up for this, we need more. As fans may have heard, Stefan (Brandon Barash) will be leaving at some point. So, that will just leave Chad when Billy Flynn reprises his role, and Kristen (Stacy Haiduk).

Tony DiMera is a conflicted character with a complicated past. He brought up some of his childhood when speaking to Kristen a few weeks ago. Long-time viewers already know about the past. However, newer viewers have no clue. He really is a great character that deserves a lot more storylines.

Days of Our Lives spoilers tease that Anna (Leann Hunley) will stand by her man. Right now, he stands accused of killing Ted (Gilles Marini). It was an accidental shooting, but he still risks going to prison. Anna is determined to clear his name. It wouldn’t be fair for her to spend an entire decade mourning his loss just for her to lose him again. They were just reunited!

Their love has stood the test of time. Fans adore watching Tony and Anna together. The writers should really give them a shot.

Mix the Old with the New

In a Days of Our Lives fan forum, one viewer mentioned mixing veteran characters with the younger, new Salemites. Let their storylines cross a bit more. So far, Tony really hasn’t dealt much with the new crowd, but he should. Imagine the possibilities!

Classic Storylines Can Make a Comeback

DOOL has been on the air for over 50 years. Tony DiMera is a classic character and each time Thaao Penghlis returns, either as Tony or Andre, fans get excited. With the actor being so loved, why not bring him back long-term? He has an entire fanbase that follows him on social media.

One of the few actors that actually interacts with his fans, bring him back on a permanent basis can revive some old classic storylines. This would please loyal viewers as well as shock the newer ones that have no idea of how crazy things got 20 years ago!

Would you like to see Thaao Penghlis stay on the soap opera for longer? What are your reasons for wanting to see more of Tony DiMera? Stay tuned to DOOL and don’t forget to check CDL often for the latest Days of Our Lives spoilers, updates and news.

The complexities of being a DiMera. This was a fun sequence. #Days #DOOL #NBC #Love #ritual ##magic #survivor #vets pic.twitter.com/p2M9fX0YoM

A caption of the last week on Days of our Lives. Thanks to the magic hands of Jan Redner. I think the cast did an amazing job. Those big scenes are always difficult. And fast. The end of another chapter. #days #NBC #passion #illusion #magic #vets #professional