Days of Our Lives Spoilers: Jennifer Moves On – Loses Hope That The Old Jack Will Return, Finds New Romantic Interest? 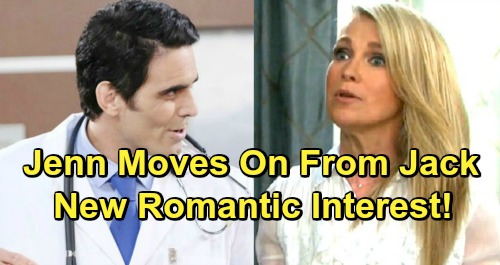 Days of Our Lives (DOOL) spoilers tease that Jennifer Deveraux (Melissa Reeves) will finally be at her wit’s end. Jennifer has been fighting for Jack Deveraux (Matthew Ashford) ever since he came back to Salem on New Year’s Eve. But she’s had a major obstacle in her way in the form of Eve Deveraux (Kassie DePaiva). Eve has been essentially attached to Jack ever since he returned to Salem, and she’s caused a lot of turmoil for Jennifer and her family.

Eve has been able to get Jack to do and say things that are completely out of character for him, including launching a campaign to deport Haley Chen (Thia Megia) and running his mayoral campaign on positions that the “old Jack” would never have supported. It’s completely dismayed Jennifer and JJ Deveraux (Casey Moss), but throughout it all, Jennifer had hope.

Jennifer knew that out there somewhere was a way for Jack to regain his memories, and it all had to do with Dr. Wilhelm Rolf’s (William Utay) diary. The diary holds the formula for a serum that can help Jack get his memory back if Jack’s willing to take it, and Jenn long hoped that the diary would be found.

Well, as it turns out, the diary did surface, and now Jack has possession of it. But whether he’ll decide to take the serum to regain his memories is another matter entirely. Of course, Eve is pressuring Jack not to take the serum because it could be dangerous, but in reality, she’s just afraid that Jack will go back to Jennifer if he regains his memory.

With all of that pressure on Jack to not take the serum, who knows what he’ll do. But it seems that Jennifer is going to get tired of waiting and wondering about what Jack’s going to do about it. According to DOOL spoilers, Jennifer will decide that it’s time to move on from the constant drama with Jack.

Perhaps Jennifer will come to the realization that she’s done everything that she can do, now that Jack has the diary. After all, she can’t force him to take the serum, and even if he does take it and gets his memory back, there’s no guarantee that he will leave Eve and come running back to her. The “old Jack” might be gone for good!

Plus, Jennifer might realize that she could actually do better than Jack if she puts herself out there and moves on romantically. Remember Dr. Henry Shah (Andre Khabbazi), who has been interested in Jennifer for well over a year now? It would be great to see her move on with him, and it might just serve to make Jack a bit jealous along the way!

Of course, exactly how Jennifer decides to “move on” from Jack remains to be seen, but our vote is that she give Henry another go! Would you like to see Jenn move on with someone other than Jack? Stay tuned to DOOL and don’t forget to check CDL often for the latest Days of Our Lives spoilers, updates, and news.