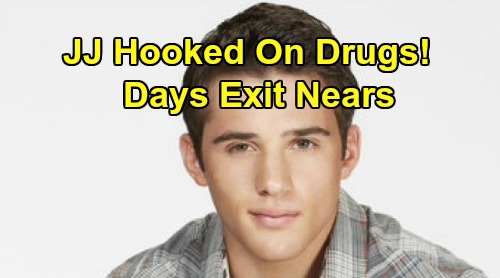 Days of Our Lives (DOOL) spoilers tease that JJ Deveraux (Casey Moss) will fall back into old habits. DOOL fans know JJ used to be a bit of a troublemaker. He did drugs and chose to hang out with the wrong crowd, but he eventually turned his life around.

JJ became great detective, but he opted to pick a new career path after shooting Theo Carver (Kyler Pettis). Now JJ’s settled into his job as a paramedic and has found love with Haley Chen (Thia Megia). Unfortunately, happiness doesn’t last forever on a soap. Days of Our Lives spoilers say JJ’s bliss will be derailed – and it could lead him down a dark path.

The drama may begin with Jennifer Horton’s (Melissa Reeves) horrific ordeal. After Princess Gina (Kristian Alfonso) shoves her off the bistro balcony, Jenn will sustain terrible injuries. She’ll be in a coma after emergency surgery, so JJ has a rough year ahead of him. Of course, that year will be off screen due to the looming time jump. Days fans won’t see JJ’s early struggles, but he’ll definitely have a hard time.

There may be other shockers that hit as well. The fun of this time jump is watching everything change instantly and waiting for DOOL to fill in the gaps. There’ll be some flashbacks along the way, so viewers won’t be too lost. Days of Our Lives will just unravel some mysteries and deliver dots for us to connect.

On November 8, we’ll finally see that time jump happen. Toward the end of the show, Days will leap one year into the future. That means we’ll see a ton of new developments during the week of November 11-15. One of them will involve JJ being back on drugs. Days of Our Lives spoilers say Eric Brady (Greg Vaughan) will discover that JJ’s high, so that can’t be good news!

No one knows the exact circumstances that’ll cause JJ to get high again, but it’ll probably be a combination of things. Between Jennifer’s nightmare and other problems that JJ’s facing, he may feel like he needs drugs to cope. Will JJ split from Haley during this offscreen year? That would certainly put JJ in a funk to climb out of, and drugs could be a way to do that.

Regardless, Moss will exit the NBC soap around early 2020 – and so will Megia. If JJ and Haley do face issues during the year we miss, perhaps they’ll get back together and still get a happy ending. They might leave town together for a fresh start. There’s also a chance JJ will land in rehab and Haley will simply move to be near him. Anything’s possible with this time jump twist setting everything up.

Whatever the case, JJ’s life will soon be turned upside down along with plenty of other Salemites. We’ll give you updates as other Days details emerge. Stay tuned to DOOL and don’t forget to check CDL often for the latest Days of Our Lives spoilers, updates and news.