Days of Our Lives Spoilers: JJ Pulls Gun on Haley’s Killer – Wants Kristen to Pay with Her Life? 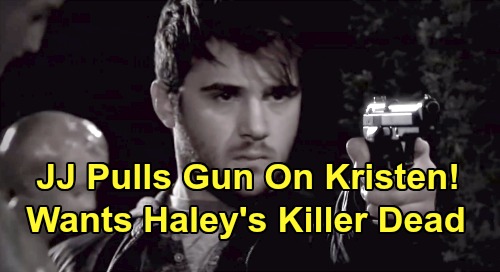 Days of Our Lives (DOOL) spoilers tease that Kristen DiMera (Stacy Haiduk) could be in grave danger – at least once JJ Deveraux (Casey Moss) tracks her down. He may not even have to thanks to a story curveball that’s coming up. It seems likely that Xander Cook (Paul Telfer) switched Kristen’s child for Sarah Horton’s (Linsey Godfrey) shortly after the babies were born.

With that in mind, Brady Black (Eric Martsolf) might find Kristen so he can share the truth. Lani Price (Sal Stowers) could help out with that if she returns to Salem before Kristen. They’re currently at the same convent, but they haven’t taken their final vows yet. There’s still time for Lani to back out and attempt to reunite with Eli.

What about Kristen? She’s obviously not going to remain a nun forever. Kristen may ultimately find out Mackenzie “Mickey” Horton is her daughter and return to Salem. That brings us back to JJ, who blames Kristen for Haley Chen’s (Thia Megia) demise. Let’s consider what Days has revealed so far.

JJ insisted that Kristen pushed Haley down a flight of stairs, which resulted in her death. Brady was apologetic over all the suffering Kristen had caused, but he pointed out Kristen claimed it was an accident. Naturally, JJ didn’t buy that for a second. Who can blame him with Kristen’s track record, especially since JJ’s in so much pain?

Nevertheless, it’s possible Kristen was telling the truth. Days of Our Lives seems to be making the character less menacing lately. What if Kristen blamed Haley for her child’s death in the heat of the moment? Haley might’ve helped with the delivery and received backlash from this grieving mom. If they fought near a staircase later, Haley may have fallen not from a push but from losing her balance.

It’s surprising that Melinda Trask (Laura Kai Chen) couldn’t find a way to take Kristen down for this. She surely would’ve wanted to lock Kristen up and throw away the key! Melinda got out her gun and nearly did something drastic during Haley’s deportation crisis. However, it’s JJ who’ll be armed and dangerous this time.

Based on DOOL’s winter promo, Days of Our Lives spoilers say JJ will pull his weapon on someone. Will it be Kristen once she returns to town? Will JJ consider taking his shot at revenge? Whatever the case, JJ will depart Days in the coming months. Whether JJ heads to prison or perhaps rehab, many fans will hate to see him go.

On the bright side, Casey Moss is getting a juicy, vengeful exit arc! We’ll give you updates as other Days news comes in. Stay tuned to DOOL and don’t forget to check CDL often for the latest Days of Our Lives spoilers, updates and news.