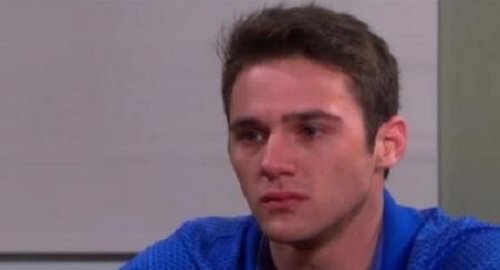 Days of Our Lives (DOOL) spoilers reveal that there were plenty of changes in Salem after the long-awaited time jump. Of course, there was one in particular that caught many Days fans off guard. JJ Deveraux (Casey Moss) suffered a crushing loss during the last year that viewers missed.

Although JJ was glad to know Jennifer Horton (Melissa Reeves) had come back to their family, he wished Haley Chen (Thia Megia) could come back to him, too. DOOL watchers saw an “in loving memory” plaque, so this obviously brings plenty of questions. Days has created a bit of a mystery surrounding Haley’s death and what it means for JJ moving forward.

Here’s what we know so far. Days of Our Lives spoilers say Haley isn’t done airing yet, which makes sense considering she’ll need to be in flashbacks. DOOL hasn’t explained the whole presumably horrible story yet. However, JJ didn’t appear to be battling guilt over Haley’s death. He only wished that she could come back to him – not that he could undo some awful mistake.

It’s good that JJ apparently doesn’t blame himself, at least not directly. Even so, this loss has to be excruciating for JJ. Days of Our Lives fans will recall that JJ already lost one love far too young. Paige Larson (True O’Brien) was strangled to death by Ben Weston (Robert Scott Wilson), who was the crazy necktie killer at the time.

Ben turned from his wicked ways, but he’s currently behind bars for a murder he didn’t commit. Talk about a twist of fate! As for JJ, he could take justice into his own hands at some point. Days of Our Lives released a winter promo, which shows JJ with a gun.

It’s possible JJ will become so distraught and out of control that he seeks deadly revenge. JJ’s on drugs, so anything can happen in an altered mental state. It’s also possible that’ll be part of a flashback, but it’s clear that JJ’s on a path of danger and destruction.

Unfortunately, JJ is set to leave the show within the next few months. Will JJ head for prison or rehab? Could the writers have another outcome in mind instead? Days of Our Lives spoilers say some shockers are coming up, so don’t miss all the action. We’ll give you updates as other Days news emerges. Stay tuned to DOOL and don’t forget to check CDL often for the latest Days of Our Lives spoilers, updates and news.