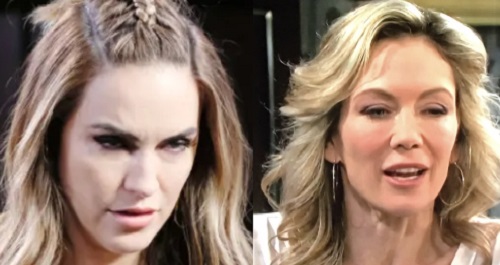 Days of Our Lives (DOOL) spoilers tease that Jordan Ridgeway (Chrishell Hartley) will make waves during the week of September 30-October 4. After Ciara Brady (Victoria Konefal) lands in grave danger, the finger will be pointed at Jordan. Ben Weston (Robert Scott Wilson) will be even more convinced his sister wants Ciara dead, but Jordan will likely play innocent with the Salem PD.

DOOL fans can expect Ben and Ciara to rat Jordan out, but Lani Price (Sal Stowers) may not be convinced. She’ll be the detective working on the case, but she may not think there’s enough evidence. Regardless, Jordan’s stint is far from over, so she won’t find herself behind bars or back at Bayview just yet.

That’s good since Days can deliver another round of Jordan drama! She’s only going to get worse as time goes on. It’s easy to see that Ben’s right about Jordan and her so-called recovery. The medical team at Bayview could use an overhaul because they clearly don’t know what they’re doing. Jordan was obviously able to manipulate them into thinking she was no longer a real threat.

Unfortunately, Jordan is indeed dangerous and will continue to target Ciara in the coming weeks. It turns out Jordan will find a partner in crime who’s equally dangerous – if not more so! During the week of October 7-11, Days of Our Lives spoilers say Jordan will form an intriguing friendship. She’ll make Kristen DiMera (Stacy Haiduk) her gal pal, so it sounds like these two will become scheming besties.

Jordan has little David Ridgeway, which could be a nice setup to this friendship. Kristen is pregnant, so she’ll be eager to talk about her impending bundle of joy. Perhaps motherhood is something they can bond over. They can also connect over doing whatever it takes to get what they want and protect their interests.

Kristen might agree to help Jordan in return for favors. Days of Our Lives could build a pretty perilous alliance here, so it’ll be interesting to see what Jordan and Kristen have in store! We’ll give you updates as other Days news comes in. Stay tuned to DOOL and don’t forget to check CDL often for the latest Days of Our Lives spoilers, updates and news.