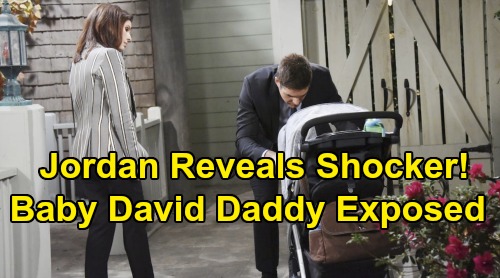 Days of Our Lives (DOOL) spoilers tease that Jordan Ridgeway (Chrishell Hartley) is headed back to Salem very soon, and she’ll have a big reunion with her infant son, David Ridgeway. As DOOL viewers know, David has been in the care of Rafe Hernandez (Galen Gering) for months. Rafe assumed legal responsibility of David after Jordan was committed to Bayview after she kidnapped and tried to kill Ciara Brady (Victoria Konefal).

It’s been a long road of recovery for Jordan, but she’ll be back in action, largely thanks to Rafe. According to DOOL spoilers, she’ll regain her freedom and be able to reunite with her son, providing that someone takes legal responsibility for her…and that someone will be none other than Rafe. Rafe will promise to give Jordan a place to live and have some stability for her and David.

Of course, ever since Jordan revealed to Rafe that she had a baby and begged him to help her, DOOL viewers have been wondering exactly who the father of the baby is. Well, DOOL spoilers indicate that Jordan will soon be making the big baby daddy reveal, and that the father will be completely shocked to find out that he’s David’s father.

So, who is currently on canvas who could possibly be baby David’s father? Well, there seems to be one glaring possibility, and that’s Rafe himself. Could Rafe be the father of Jordan’s little boy? From the beginning, Rafe has felt a special connection to the infant and has insisted on doting on the little boy, so perhaps the two share a genetic connection.

Of course, if that’s the case, then DOOL will have some explaining to do. Up until a couple of months ago, Rafe was involved with and married to Hope Brady (Kristian Alfonso), and there has been absolutely no indication that he was ever unfaithful to her with Jordan. In fact, Jordan wasn’t even on canvas during the time when David would have been conceived, so if the show does reveal that Rafe is the daddy, then there needs to be a good explanation here.

One possibility is that we could be looking at an artificial insemination storyline – after all, Jordan’s a former healthcare professional, so she may have some connections that would have made that possible. It certainly sounds like something Jordan might do, but how she was able to pull it off would need some careful explanation.

Of course, another possibility is that David’s father is someone else who’s currently on canvas, but we’re hard pressed to say who that could be. Right now, Rafe seems to be the main contender. Do you think he’ll wind up being David’s father? Stay tuned to DOOL and don’t forget to check CDL often for the latest Days of Our Lives spoilers, updates, and news.