Days of Our Lives Spoilers: Sarah Changes Mind About Abortion – But It’s Too Late Due to Kristen DiMera’s Sinister Scheme 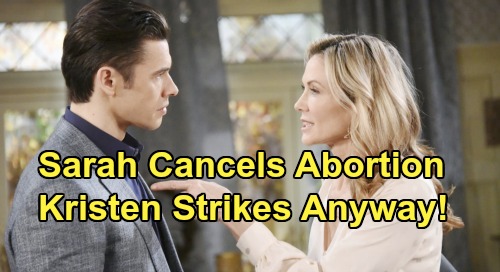 Days of Our Lives spoilers reveal Sarah Horton (Linsey Godfrey) changes her mind about getting an abortion. However, Xander Cook (Paul Telfer) already revealed the baby drama to Kristen DiMera (Stacy Haiduk). Could the villainess vixen go ahead with her sinister scheme?

It is confirmed that Sarah will make a decision about her baby. Instead of just telling Eric Brady (Greg Vaughan) about the pregnancy, she makes a drastic decision. The doctor chooses to terminate the “problem child.” She justifies it as her not wanting to come between Eric and Nicole Walker (Arianne Zucker). But some fans believe that in Sarah’s mind, it’s just easier to eliminate the issue rather than tell Eric the truth.

Days of Our Lives spoilers state that Kristen DiMera gets involved in the storyline. She isn’t done destroying lives in Salem. It seems that Sarah is next on her list. To be clear, her target isn’t necessarily Sarah, but what the pregnant doctor can provide.

The vixen will push Xander for information about Sarah’s “condition.” It is speculated that it is because Sarah has something that Kristen has always craved — a child.

Days of Our Lives spoilers say that after planning an abortion, Sarah will change her mind. However, Kristen already has a plan in place. She has Dr. Rolf (William Utay) help her in planning an “unusual procedure.” That must have something to do with Sarah’s baby.

Now, what happens when Sarah changes her mind? Once Kristen has a goal in mind, she never backs out of it. This could give her back the man she is obsessed with, Brady Black (Eric Martsolf). There is no way she will allow Sarah to ruin her plans.

DOOL spoilers suggest that Kristen will have to come up with an alternative way to get Dr. Rolf to complete the procedure. Will Kristen have Sarah drugged and kidnapped, or something worse? Will she force Sarah to undergo the procedure, then have Dr. Rolf wipe her memory of ever being pregnant?

Fans will have to wait to see how Kristen will handle Sarah’s change of heart. But one thing is for sure: Kristen never gives up without a fight. Stay tuned to DOOL and don’t forget to check CDL often for the latest Days of Our Lives spoilers, updates and news.