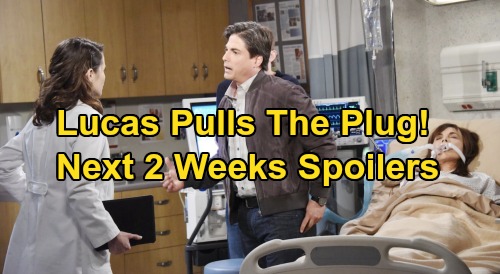 Days of Our Lives (DOOL) spoilers for the next two weeks tease that several Salemites will be shocked. During the week of September 16-20, Ben Weston (Robert Scott Wilson) and Ciara Brady (Victoria Konefal) will be thrown for a loop. They’ll realize Jordan Ridgeway (Chrishell Hartley) has scored her release from Bayview as well as custody of David.

However, Rafe Hernandez (Galen Gering) will have to be legally responsible for Jordan. He’ll sign off on her release and let her move in, which will please Jordan. Since Rafe has done such a great job taking care of her son, she’ll think they can make a great team. It sounds like Jordan will even see the possibility for a romantic reunion.

Of course, Ciara and Ben will be concerned about this whole arrangement. Days of Our Lives spoilers say Ciara will confront Jordan about trying to kill her. Jordan will insist she deeply regrets her actions, but Ciara and Ben won’t be sure they buy it. A cryptic comment Jordan makes will seem a lot like a threat.

While Ben worries about Jordan going after Ciara again, Jennifer Horton (Melissa Reeves) will try to escape a hostage crisis. Dr. Henry Shah (Piter Marek) will turn into a total nightmare as he holds Jennifer in a hotel room. She’ll ultimately contact Jack Deveraux (Matthew Ashford) and tip him off to her location, so a fierce faceoff is brewing.

During the week of September 23-27, Jack will have the ultimate showdown with Jennifer’s captor. He’ll battle it out with Dr. Shah and save Jennifer from his now evil clutches. Over with dying Julie Williams (Susan Seaforth Hayes), she’ll have a final wish to pass along. It’s something that should catch Maggie Kiriakis (Suzanne Rogers) off guard.

Next, Days spoilers say Lucas Horton (Bryan Dattilo) will have to make an agonizing decision. Kate Roberts (Lauren Koslow) will be in a coma without hope, so Lucas will ultimately determine it’s time to pull the plug. It won’t be long until Lucas decides Julie can have Kate’s heart. Lucas’ choice will leave Julie’s loved ones incredibly touched, but not so fast! This isn’t the end of the story.

It looks like there’ll be some last-minute change of plans. We know Kate will pull through, but Stefan DiMera (Brandon Barash) is headed for the exit door. That suggests Stefan’s heart will actually be the one donated after tragedy strikes. DOOL fans should be prepared for some crushing scenes down the road.

Other Days of Our Lives spoilers say Sarah Horton (Linsey Godfrey) will waver on her pregnancy decision. She’ll decide to get an abortion, but she’ll eventually rethink things and choose to keep the baby. Unfortunately, Kristen DiMera (Stacy Haiduk) will pump Xander Cook (Paul Telfer) for info on Sarah’s bun in the oven. She’ll also turn to Dr. Wilhelm Rolf (William Utay) for a bizarre procedure.

Despite Sarah’s change of heart, it appears Kristen’s got some baby tricks up her sleeve! A stolen embryo situation may be where this is headed, so don’t miss all the action. We’ll give you updates as other Days news comes in. Stay tuned to DOOL and don’t forget to check CDL often for the latest Days of Our Lives spoilers, updates and news.