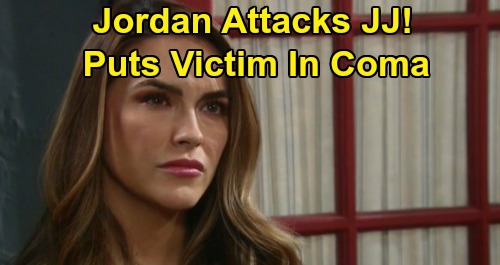 Days of Our Lives (DOOL) spoilers tease that JJ Deveraux (Casey Moss) will soon be in terrible danger. It’s been a while since DOOL viewers have seen JJ in action. He was shown briefly on canvas when Jack Deveraux (Matthew Ashford) got his memories back for a nice reunion with his dad. But it’s been a while since viewers have seen him involved in a riveting storyline. But that’s about to change, as he’s going to wind up in a precarious situation.

According to DOOL spoilers, JJ will soon be seriously injured, and it will be the result of Jordan Ridgeway’s (Chrishell Hartley) actions. But how will this come about? DOOL spoilers are clear that it won’t be an accident and that Jordan will actually attack JJ, so he might become a threat to her big plot to take down Ciara Brady (Victoria Konefal).

Of course, Jordan has been obsessed with getting rid of Ciara for a long time. Earlier this year, she abducted Ciara and held her in a remote cabin, then set the cabin on fire. That got her sent straight to Bayview, but she has since been deemed rehabilitated and released. Yet she still seems obsessed over “protecting” Ciara from her brother Ben Weston (Robert Scott Wilson). Soon, she’ll be cooking up another deadly plan for Ciara.

According to Days of Our Lives spoilers, Jordan will invite Ben and Ciara to a birthday party for her infant son, David Ridgeway. They’ll be touched to be invited, but Jordan will have a deadly plot in mind. She’ll bake cupcakes for the occasion, and she’ll plan to poison one of the cupcakes and give it to Ciara. And it looks like her plot may work, given that Ciara will start to feel ill as the party progresses.

But it seems that there may be more to the story here. Could JJ possibly figure out what Jordan is up to and confront her about her actions? JJ is no longer a police officer, but he still has his detective skills and he might suspect that something’s going on with Jordan, especially if Ben, Ciara, or Rafe Hernandez (Galen Gering) enlists his help somehow.

At any rate, something big is going to go down between Jordan and JJ, and JJ will be in pretty bad shape as a result. In fact, CDL has reported that JJ may even wind up in a coma as a result of the attack and will spend the upcoming time jump in a coma. Given that Days of Our lives spoilers say JJ will be the victim of an attack by Jordan and will be seriously injured, it makes sense that it could be him who winds up in the coma.

Of course, exactly what happens here remains to be seen, but if Jordan indeed winds up putting JJ in a coma, then we could see her head to prison. We should note that CDL also reported that two DOOL characters will be in prison after the time jump. If Jordan does attack JJ, then she could easily end up being one of the characters in prison, especially if the attack winds up exposing Jordan’s plot to kill Ciara as well.

Do you think that Jordan will wind up in prison for attacking JJ? Stay tuned to DOOL and don’t forget to check CDL often for the latest Days of Our Lives spoilers, updates, and news.