Days of Our Lives Spoilers: Justin Proposes To Adrienne – But Will She Survive The Time Jump?

BY hellodrdavis on October 13, 2019 | Comments: one comment
Related : Days of Our Lives, Soap Opera, Spoiler, Television 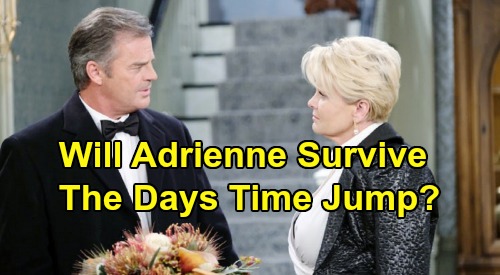 Days of Our Lives (DOOL) spoilers tease that a big proposal is on the way. According to DOOL spoilers, Justin Kiriakis (Wally Kurth) will soon pop the big question to Adrienne Johnson (Judi Evans). These are two characters that DOOL viewers haven’t been seeing much of lately, so it will be great to see them back on canvas and interacting together. For a while now, we’ve only seen Justin pop up when someone needs a lawyer. And Adrienne surfaces only on occasion to counsel Sonny Kiriakis (Freddie Smith). It will be nice to have this super couple back in action.

And it will especially nice to have Justin and Adrienne making their reunion official. It will surely thrill Sonny to have his mom and dad married to each other again, and we can probably expect to see a nice family celebration over the whole thing. Of course, with the DOOL time jump coming up in the next several weeks, we may or may not actually see the wedding take place. Right now, it’s unclear how Days of Our Lives will handle all of the ongoing storylines when they advance a year into the future.

It could be that the wedding happens during the year that’s skipped over. If that’s the case, then viewers may just hear about the wedding as characters are talking about past times, or perhaps viewers will see the wedding in flashback clips. Whatever the case, it looks like a wedding will ensue, but there’s another piece of information that’s not so great that we need to pass along.

According to Days of Our Lives buzz, the character of Adrienne may be on her way out, and specifically she may die on the show. This would be a tragic development for sure, and also one that could conceivably be handled as part of the time jump. For example, her death could occur during the year that’s skipped over, perhaps after her wedding to Justin. As Days viewers will remember, Adrienne is a breast cancer survivor, and there’s always the possibility that her cancer will return and claim her life.

Of course, if this happens, it would be tragic all the way around, but it would be particularly terrible if it were to happen while Adrienne’s brother Steve Johnson (Stephen Nichols) was off canvas. Right now, Steve is off on an assignment related to his treason charges that stemmed from the “bionic eye” that Kayla Johnson (Mary Beth Evans) secured for him from Stefan DiMera (then played by Tyler Christopher). It would be a shame if Steve were to miss saying goodbye to his sister. It’s something that viewers certainly wouldn’t want to miss.

At any rate, we’ll see what ends up happening with Adrienne, and we’ll hope for a better outcome than the character’s death. We’d love to see her happy, healthy, and reunited with both Jack Deveraux (Matthew Ashford) and Steve down the road.

Do you think that Adrienne will end up dying? Stay tuned to DOOL and don’t forget to check CDL often for the latest Days of Our Lives spoilers, updates, and news.