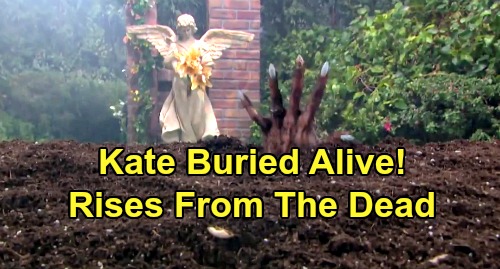 Days of Our Lives (DOOL) spoilers tease that one Salemite is set to be buried alive! DOOL’s fall promo features a hand bursting through the dirt as someone rises from the grave. Although this could be a fantasy of some sort, there’s a good chance it’s real – real for Salem at least! We all know some far-fetched things occur there on a daily basis, so don’t be surprised if this is more than a nightmare.

Here’s how we think things will play out. Vivian Alamain (Robin Strasser) will carry out a terrible revenge plot with the help of Stefan DiMera (Brandon Barash). The result will be catastrophic for Kate Roberts (Lauren Koslow), who’ll end up dying in a hospital bed. Later, Vivian will sneak in Kate’s room in hopes of finishing her off. However, it seems Vivian may take a slightly different route instead.

This is where some Days of Our Lives history comes into play. Vivian has buried someone alive on more than one occasion. Longtime DOOL watchers will recall when Vivian faked Carly Manning’s (Chrystal Chappell) death and taunted her through a walkie-talkie device in her casket. Vivian was taking herbs that made her a little loopy at the time, so she came clean once they wore off and Carly was saved.

Vivian also buried Maggie Kiriakis (Suzanne Rogers) alive in a sarcophagus at one point, so this is her MO! We have every reason to believe Vivian will target Kate with a burial scheme this fall. It should be easy with Dr. Wilhelm Rolf’s (William Utay) help. Kate’s demise should seem genuine to her loved ones at the hospital, but they’re in for a shock.

Lauren Koslow is known for her ornate jewelry and wild fingernails, which can be seen on the hand rising from the grave. Back in December 2018, Koslow posted a photo of her nails, which look like what’s featured in the promo. Days films several months in advance, so the timing lines up. We can pretty much assume Kate is the one who’ll stun her family by coming back from the “dead.”