Days of Our Lives Spoilers: Kate Goes Down For Attempted Murder, Comes Face To Face With Vengeful Vivian 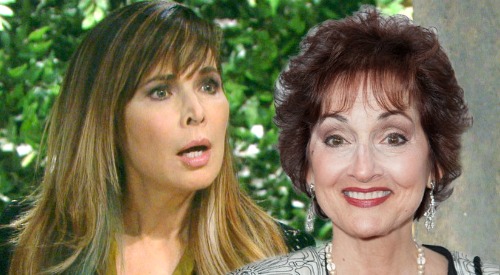 Days of Our Lives (DOOL) spoilers tease that Kate DiMera (Lauren Koslow) will be feeling on top of the world. As DOOL viewers know, Mr. Shin (Michael Hagiwara) recently approached her about becoming the new CEO of DiMera Enterprises. Right now, Gabi DiMera (Camila Banus) is acting CEO, but Mr. Shin really wants someone with more experience and tenure in her place, so it seems that Kate will soon take the job.

And that will put her in a position of power with Stefan DiMera (Brandon Barash) and Gabi. According to DOOL spoilers, Kate will not only flaunt her new position over the newly married couple, she’ll even announce that she’s moving into the DiMera mansion. It seems that most of DiMera business is conducted out of the mansion, so it makes sense for Kate to move right on in.

But soon, there will be a shocking development that will totally get in the way of Kate’s big DiMera reign and may threaten her very freedom. Vivian Alamain (Robin Strasser) will suddenly return from the dead, which will be a huge shock for everyone, and especially for Kate. As DOOL viewers will remember, Kate shot Vivian in cold blood, then she lied and said the shooting was in self-defense.

Since the forensics were inconclusive, Kate skated on the murder charges and went free, which has always irked Stefan. Kate has clearly hinted to Stefan in the past that the shooting wasn’t accidental, but Stefan has had no way to prove that Kate murdered his mother, and it’s been the source of great frustration.

Well, now Vivian’s going to be back, and perhaps she’ll have a story to tell about what Kate really did on the day of the shooting. Of course, since Vivian’s not actually dead, then Kate won’t ultimately go down for murder, but she could conceivably go down for attempted murder, if indeed Vivian remembers what happened that day.

Of course, Vivian might just decide to forego going to the police and turning Kate in. She could decide that it would be more fun to hold the attempted murder over Kate’s head and use it as leverage to get Stefan back to the helm of DiMera Enterprises. Since this is the scheming Vivian we’re talking about, she’d surely rather have leverage over Kate than turn her in.

We’ll see what ultimately happens between Kate and Vivian, but it should be an explosive scene as the two arch enemies come face to face for the first time since the shooting. Are you looking forward to watching the confrontation unfold? Stay tuned to DOOL and don’t forget to check CDL often for the latest Days of Our Lives spoilers, updates, and news.