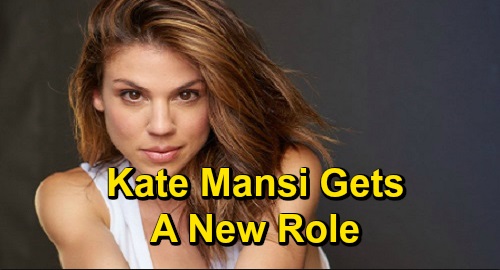 Days of Our Lives (DOOL) spoilers has some great news to pass on about a popular DOOL star. Kate Mansi, who portrays Abigail DiMera on the NBC soap, has branched out to directing, and she recently took to Instagram to announce that she had directed an episode of Days of Our Lives.

Kate shared a photograph of the inside of a TV control room at the DOOL studios along with the following caption: “This picture is special. Here’s why: I took it right before I dove into my very first day ever directing. I’m immensely grateful for the opportunity to have dipped my toe into this field, especially having done so under the care of a fearless female (+fellow Italian!!!) mentor.”

Kate continued: “Thank you to everyone who allowed me the privilege of observing & shadowing your work these last few months. I’m in awe of your Matrix world & honored to be among you. And also…I can’t wait for more!!!”

Later, Kate shared two additional pictures of herself in action sitting at the controls, and in her caption shared a cute story about how her on-screen mom, Melissa Reeves (Jennifer Horton, DOOL), took the pictures.

Kate wrote: “Aaaaand here’s why these pictures are special: before I started the day, @missyreeves came in the booth to take photos of me on my first day, (as any decent mamma would do)… but after a few snaps I had to literally ask her to leave bc she was blocking all the monitors trying to get a good shot. That’s a Mamma for ya! Thank you, Missy, in hindsight I’m so grateful you insisted on just one more picture.”

Kate has received a lot of great feedback on her posts from both her fans and her fellow soap stars. Both Eileen Davidson (Ashley Abbott, Y&R) and Marci Miller (Abigail DiMera, DOOL) responded to Kate’s posts with enthusiastic emojis, and many fans have shared their congratulations wit Kate on her feed.

Kate can currently be seen in “Chad & Abby In Paris,” the short series available on the DOOL app. Both Kate and Billy Flynn (Chad DiMera, DOOL) are scheduled to return to Days of Our Lives later this year.

There’s no word yet on when the DOOL episode that Kate directed will be airing, but given that the show films about six months in advance, it will be well into 2020 when her episode airs.

We look forward to watching Kate’s episode in the future! Stay tuned to DOOL and don’t forget to check CDL often for the latest Days of Our Lives spoilers, updates, and news.