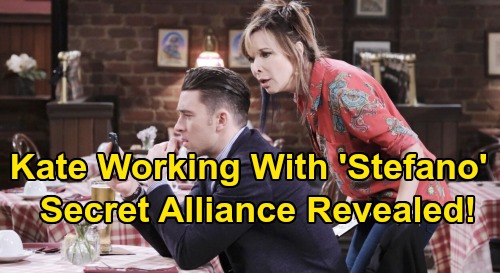 Days of Our Lives (DOOL) spoilers tease that Kate Roberts (Lauren Koslow) will pry a confession out of Chad DiMera (Billy Flynn). DOOL fans know Kate’s been working as a waitress at the pub, where Chad often pops in. Although they’ve faced their fair share of issues, Kate and Chad have developed a pretty nice bond over the years.

That’s why Chad will feel like he can trust Kate enough to confide in her. He’ll admit he’s been in contact with “Stefano DiMera” aka Steve Johnson (Stephen Nichols), so Kate should be taken aback. Days of Our Lives spoilers say Kate will seem surprised over the proof on Chad’s phone. However, this news may come as a shock for a reason different than Chad assumes.

It turns out Kate has a secret, so we might as well speculate on what that secret might be. There are some clues that could point in the right direction. During the week of December 16-20, Roman Brady (Josh Taylor) will grow suspicious. He’ll stop by Kate’s room and realize she’s hiding someone in there, so “Stefano” would be a good option.

After all, Kate is single and can have anyone in her room she wants. She doesn’t have to answer to Roman or anybody else for that matter. The only reason Kate would need to hide someone is if she didn’t want their connection discovered or wanted to protect this person’s identity. In the case of “Stefano,” he fits on both counts.

If Kate is working with “Stefano,” she wouldn’t want Roman to figure that out. “Stefano” happens to look just like Steve, and he’s not read to reveal himself to the world yet. It makes sense that Kate would be trying to honor his wishes by hiding him.

It also makes sense for Kate to be unsettled by “Stefano’s” communication with Chad. She may give “Stefano” an earful for contacting his son without telling her. If they’re trying to keep a secret his big under wraps, they don’t need any other little secrets between them.

Now you might be wondering what proof there is that Kate even knows this is “Stefano” and not Steve. We’d argue that the puzzle pieces click based on what we’ve mentioned. Plus, Days of Our Lives spoilers say a guilty Kate will listen to Marlena Evans’ (Deidre Hall) troubles.

Why should Kate feel guilty when she’s just catching up with an old friend? Probably because Marlena will bring up her “Stefano” fears – and Kate may know exactly what “Stefano” has in store for his “Queen of the Night.”

Days buzz also points to a potential Kate and “Stefano” romance, so that could fit, too. It’s easy to imagine “Stefano” falling for his former flame as a result of this alliance. That romance may not be happening right now, but this is the perfect setup for it.

Plus, Kate is certainly the kind of person that’d keep “Stefano’s” secret for him. She doesn’t have a strong moral compass, so the whole memory manipulation thing probably wouldn’t be a big deal to her. Whatever the case, Days of Our Lives spoilers say Kate’s caught up in something dangerous and complicated!

Do you think Kate and “Stefano” are in cahoots? We’ll give you updates as other Days details emerge. Stick with DOOL and don’t forget to check CDL often for the latest Days of Our Lives spoilers, updates and news.