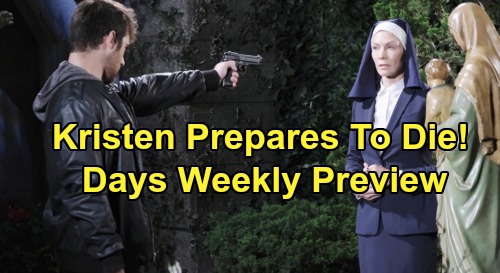 Days of Our Lives (DOOL) spoilers tease that we’re in for some major drama as the action heats up in Rome. The new DOOL promo preview or the week of December 9 is all about some major revelations that occur at the convent where Lani Price (Sal Stowers) and Kristen DiMera (Stacy Haiduk) are planning to take their vows. Of course, whether either of them will make it to their ceremony is anyone’s guess at this point, now that two additional Salemites are present at the convent to shake things up.

First off, the promo shows Lani coming face to face with Eli Grant (Lamon Archey) inside the convent. As DOOL viewers know, Lani has just turned around to see Eli standing before her. In the promo, Eli asks Lani what she’s doing dressed like a nun, clearly not comprehending the fact that Lani has indeed become a nun. Lani will have some major explaining to do from here, and of course the big question on viewers’ minds will be whether she’ll end up telling Eli the truth about Gabi DiMera (Camila Banus).

Gabi is the reason that Lani dumped Eli at the alter a year ago. Gabi was (and still is) armed with the ability to control Julie Williams’ (Susan Seaforth Hayes) pacemaker and kill her on a whim. Gabi threatened to kill Julie if Lani didn’t humiliate Eli in front of all of his friends and family. Now that Lani has Eli’s undivided attention at the convent, will she spill the beans on Gabi?

Well, Days of Our Lives spoilers indicate that the conversation between Eli and Lani won’t get very far. It looks like Lani will learn that Eli is now in a relationship with Gabi, which will absolutely stun Lani. But it seems that before they can talk further, something big is going to get their attention, as DOOL spoilers say that Lani will get involved in trying to talk JJ Deveraux (Casey Moss) out of making the biggest mistake of his life.

And that leads us to the second aspect of the Days of Our Lives preview promo, which is the face to face encounter between Kristen and JJ. As DOOL viewers know, JJ has just encountered Kristen in the convent gardens, and he’s intent on getting his revenge on her for Haley Chen’s (Thia Megia) death. Days viewers aren’t privy yet to exactly how Kristen killed Haley, but we know that it had something to do with the death of Kristen and Brady Black’s (Eric Martsolf) baby daughter.

At any rate, a disheveled and likely high JJ will hold Kristen at gunpoint in the garden, telling her that “You killed my girlfriend” and “I am sending you straight to hell” as she kneels before him, closes her eyes, and apparently resigns herself to death. But the action isn’t going to end here, as somehow Lani comes upon the scene and tries to talk JJ down.

Look for some gripping scenes as Lani makes a big emotional appeal to JJ to try to get him to spare Kristen’s life. Of course, Lani and JJ used to be in a relationship, so she might have some pull with him as she pleads with him to put the gun down and let Kristen go. Exactly how Kristen gets out of this remains to be seen, as it’s always possible that Eli will come upon the scene as well and disarm JJ.

We’ll see how it all works out, and if we’re lucky, we’ll get the rest of the story about how Haley was killed throughout the process! At any rate, it looks like we’re in for an exciting week, so stay tuned! We’ll give you updates as DOOL news comes in. Stick with the NBC soap and don’t forget to check CDL often for the latest Days of Our Lives spoilers, updates, and news.