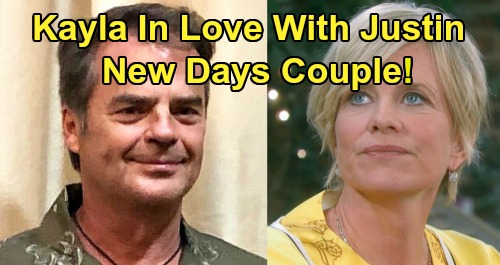 Days of Our Lives (DOOL) spoilers tease that some new couples are brewing thanks to the looming time jump. On November 8, Salem will leap ahead one year. That’ll bring plenty of surprises during the week of November 11-15 – including some fresh romances.

Kayla Johnson (Mary Beth Evans) will head home for a lovely evening with someone special. Unfortunately, that special someone won’t be Steve Johnson (Stephen Nichols). Kayla’s already been talking about a divorce, and a set pic confirmed her lab coat’s name change. It’ll go from Dr. Johnson back to Dr. Brady soon, so that makes it clear that Kayla will be moving on with her life.

So who’s the lucky guy? There aren’t a ton of options in Salem, and it’s doubtful Days is bringing somebody new in for Kayla. With that in mind, it seems likely that some recent DOOL buzz is true. Word has it Kayla will be paired with Justin Kiriakis (Wally Kurth) after the time jump. It makes sense when you consider the clues.

Days of Our Lives spoilers say a shocking death will be revealed. Justin and Adrienne Kiriakis (Judi Evans) are remarrying out of the blue, so that’s a bad sign. We also know Kurth is back on contract for a gripping storyline. It sounds like following the time jump, we’ll see flashbacks of Adrienne’s death and how Justin coped with the loss.

If Adrienne indeed dies as expected, it’ll be a difficult loss for Kayla as well. She’ll undoubtedly support Justin in his time of need, which could lead to flying sparks after he heals. Keep in mind that viewers will miss an entire year of life in Salem. Adrienne may die shortly after the jump happens, giving Justin a chance to grieve and move on with Kayla.

If you’re also a General Hospital fan, you may remember Evans and Kurth’s characters were paired up once upon a time. GH’s Katherine Bell and Ned Ashton – now Ned Quartermaine – managed to sizzle. Perhaps they can recapture that chemistry as Kayla and Justin, but “Stayla” and “Jadrienne” fans probably aren’t going to approve. Days of Our Lives is going against the supercouples that viewers root for, so this pairing is a risk.

Nevertheless, it certainly looks like Kayla will return home for a steamy night with Justin! Tune in during the week of November 11-15 to see many more time jump shockers. We’ll give you updates as other Days news emerges. Stick with DOOL and don’t forget to check CDL often for the latest Days of Our Lives spoilers, updates and news.